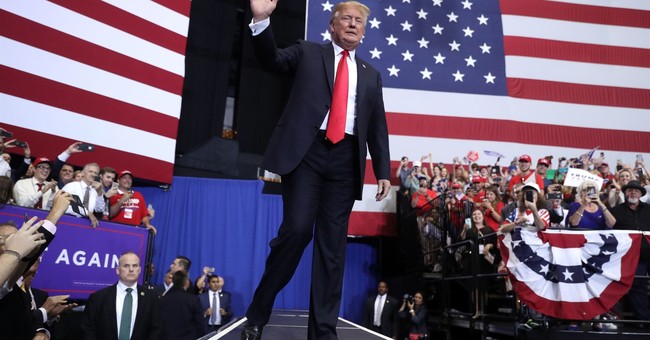 Well, the tail end of 2017 and the beginning of 2018 started off with the incoming blue tsunami. The Democratic takeover was all but assured. The Democratic Party base was super energized. The generic ballot advantage favored Democrats by double-digits. The GOP was so, so screwed, right? Yeah, no—as many of us already know there’s still an eternity between now and Election Day in the political universe. Anything can happen—and it has. The generic ballot advantage has shrunk to single-digits. The economy is improving, millions of working class families, and hundreds of companies, are benefitting from Trump’s tax reform, and the Left really hasn’t offered much other than we don’t like Trump. On the 2018 campaign trail, the 2020 contenders are increasing their profile. Sens. Kamala Harris (D-CA) and Cory Booker (D-NJ) are notable examples. Sen. Kristen Gillibrand (D-NY) is another possible 2020 candidate. Most if not the entire 2020 field for the Democrats are unknowns.

They’re not an Obama or Clinton caliber name. They’re not even Joe Biden or Bernie Sanders, both men could also toss their hat into the ring. They’re young politicians with regional appeal, very regional appeal. It also doesn’t help that some, like Booker, say they can relate and understand rural voters because they read books about them. Uh, besides that point being malarkey, Trump’s potential challenges hail from California, New York, and New Jersey—it’s the epitome of liberal elite. These people don’t care about rural voters. They mock them and think they’re inferior. So, for folks who live in the more grounded parts of the country, be aware that the Democratic Party’s base hates you and they hate your values; don’t let the wolf in the hen house so to speak.

Trump could beat the 2020 field. Sanders might be more of a fight, but overall—Democrats are still worried that the Trump era could last a full eight years. Hence, why there seems to be a debate on Team Obama over how they should feel about these Korea talks. If Trump succeeds and inks a deal between the two nations, but that would allow the Trump White House to make a case for a second term. It would undercut and slay the talking point that Trump would bring chaos to the world; a Korean deal would be a Nobel Peace Prize worthy accomplishment (via NTK Network):

MSNBC’s Hallie Jackson asked Baker what former Obama staffers are most worried about when it comes to Trump undoing former President Obama’s legacy.

“What they’re concerned about most is whether President Trump gets reelected,” Baker said.

The reporter then explained how former Obama staffers are debating whether it’s better for the country for Trump to reach a deal with North Korea or for the negotiations to fail.

“Because you don’t want anything to happen that would give him an argument for a second term,” Baker said. “So, they are struggling with this idea that Donald Trump is not necessarily a one-term phenomenon. He could very well be president for eight years.”

If the economic news remains positive, if the small business and consumer confidence indicators maintain their record high positions, if the Left keeps bashing his supporters and keep self-owning themselves in epic fashion—yes, Trump will be re-elected. AND if the GOP is able to hold onto the House, then you can bet those chances increased ten-fold. Real Clear Politics’ Sean Trende admitted that by the time we get to Election Day, that Blue Wave could very well turn into a low tide:

GRIFF JENKINS, FNC: Listen, the president’s approval rating is up. We’ll just put it up quickly so you see it if you haven’t already. 42% approve, that is incredibly up from the 30% that most Democrats refer to in recent weeks. Tell me, why are we seeing this approval? And you have about three things you believe we should be looking at right now.

SEAN TRENDE, RCP: There’s a couple of things going on. I think the good economic news is starting to break through. I think people are starting to question where the Mueller investigation is going. I think it had kept the president down for a while. And I think the tax cuts energized the Republican base and are playing a role in the president’s improving fortunes.

JENKINS: Now, traditionally, about 23, 24 seats change hands in these midterm elections. Aside from the environment that we’re in, how do you factor in this environment now?

TRENDE: Well, I think if you looked six months ago, you would say it was doomsday for the Republicans with the Republican down in the 30s, showing a double-digit lead for Democrats. But that’s just not the world we’re in today. The president is up into the low to mid 40s, and his job approval, the generic ballot has closed to a four-point lead for the Democrats, so I think we’ve gone from Democrats being heavy favorites to take the House to something of a dead heat and maybe a thumb on the scale for the Republicans...

Keep America Great! Am I right?