ICYMI: The Left Stepped On A Rake Trying To Bash Trump's Immigration Policy 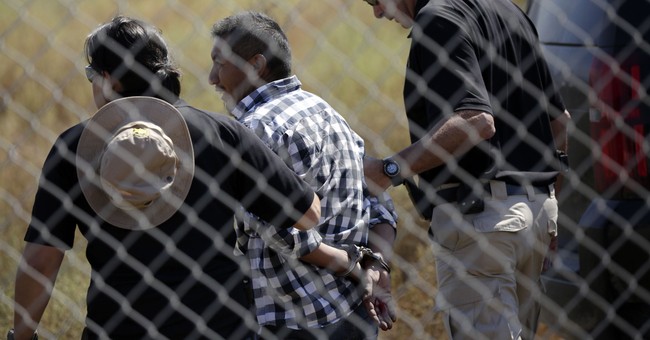 Over the Memorial Day weekend, the Left ate some humble pie. I mean, a lot of it. You see while many joke around about Trump Derangement Syndrome, there seems to be a few left wingers who—you know—actually have it. Also, this weekend’s trip up is a friendly reminder that you should read the article before commenting on it. This foul-up stems from the Left’s collective fake news push over President Trump’s immigration policies. The latest criticism from Democrats is that the president’s crackdown on illegal immigration is splitting up families. So, when old photos of immigrants in detention centers surfaced, it had to be Trump’s fault right. Nope. These photos were taken in 2014. At the time, Katie wrote about the hordes of unaccompanied migrant children that were picked up at the border, the overcrowding at our detention facilities, and obtained exclusive photos of the event.

Hi, @jonfavs. If you care so much about these kids, why did you delete this when you realized the story dates back to when Obama was in office? https://t.co/Zpen6NXlSJ pic.twitter.com/znf4Dnz4Sg

Oops they did it again. pic.twitter.com/d2egDDJqgm

I saw this photo floating around and didn’t know if it was real.

Children of immigrants are being held in cages, like dogs, at ICE detention centers, sleeping on the floor. It’s an abomination.

In a now-deleted tweet, former Obama speechwriter Jon Favreau said, “Look at these pictures. This is happening right now, and the only debate that matters is how we force our government to get these kids back to their families as fast as humanly possible.”

Shaun King, Linda Sarsour, and Team Obama tried to bash the Trump White House only to have their Molotov cocktail explode inside the ship. Or to be more accurate, they shot inside their own ship. This was Obama’s crisis. All of this that’s being peddled by the Left on this issue occurred under the Obama administration. And this isn’t the first time they’ve done this; the liberal news media tried to say that the president was calling immigrants “animals,” when it was quite clear he was referring to MS-13. If the news media continues to wonder why they’re loathed and not trusted, well—here’s your answer. To the Left, you got caught peddling a lie. Time to confess and apologize.

Democrats mistakenly tweet 2014 pictures from Obama’s term showing children from the Border in steel cages. They thought it was recent pictures in order to make us look bad, but backfires. Dems must agree to Wall and new Border Protection for good of country...Bipartisan Bill!