Thanks, Anti-Gunners: The NRA Is Now Six Million Strong 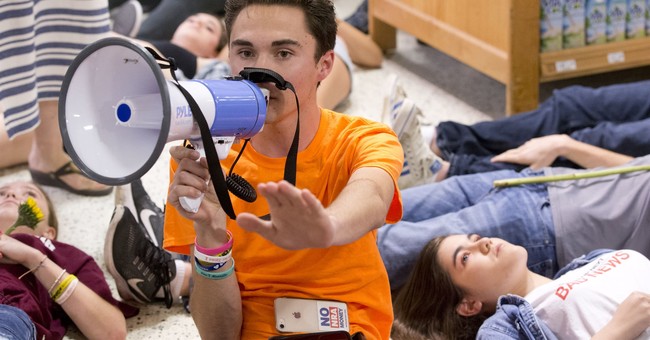 Besides tributes to those who have given their lives in defense of our country, there was also a die-in protest at Publix by the anti-gun Left led by activist David Hogg. Publix is a Florida-based supermarket chain that operates in the Southeastern U.S.  It had given to 2018 Republican gubernatorial candidate Adam Putnam, who is a supporter of the National Rile Association.  Was it effective? Well, for the gun control crowd, they sure think so; Publix announced they would suspend political donations (via WaPo):

The supermarket chain Publix on Friday announced that it would suspend its political contributions to Adam Putnam, a Republican candidate for Florida governor, after being faced with overwhelming pressure to cut ties with him because of his fierce support for the National Rifle Association.

“We would never knowingly disappoint our customers or the communities we serve,’’ Publix said in a statement Friday. “As a result, we decided earlier this week to suspend corporate-funded political contributions as we reevaluate our giving processes.’’

At two Publix supermarkets in Parkland, survivors of the February shooting at Marjory Stoneman Douglas High School shouted “USA, not NRA!” as customers navigated their shopping carts around them on the floor, according to the Associated Press. Counterprotesters supporting the NRA turned up at one of the stores, where a near-confrontation almost occurred between two men before police intervened.

The protesters were calling for an end to Publix’s support for Putnam, Florida’s agricultural commissioner, who has called himself a “proud NRA sellout.”

“A lot of people don’t support who Publix is supporting,” Haylee Shepherd, a 15-year-old sophomore at Stoneman Douglas, told the Associated Press. “It’s going to reflect on them as a brand and people shopping there.”

Well, if that were the standard, I would say that first of all, no one cares, kids. No one. People go to grocery stores to buy food, feed their families, and get on with their day. Only the most hipster of Americans actually cares about this type of commercial activism, and they usually do it while wearing clothes made from sweat shops.

Second, like Minnesota Vikings fans, these kids are bound for disappointment. No, that’s no quite right. It’ll be absolute devastation because they’ve already lost. I have a news bulletin. The NRA has experience record fundraising this year. In fact, the NRA’s Political Victory Fund raised more than the top three anti-gun PACS combined last month. April had another record month in gun sales, though some of the background checks ran during that period could have been for concealed carry permits. Still, all of this activity is in support of the Second Amendment and gun ownership. The NRA also had a goal of increasing membership by 100,000. Well, they soared past that by 900,000. The NRA, which touts its five million members, of which I have been a proud one since becoming eligible to vote, is now a six million strong organization.

So, it would seem that a lot of people support the NRA, its message, its principles, and its agenda. But wait—isn’t support for gun control high? Right now, yes—but as always, it dips precipitously as time goes on. It happened with Sandy Hook. It’s happening now.

Recommended
Will He or Won’t He
Kevin McCullough

There’s a reason why new gun control laws are only passed in the most liberal areas of the country, it’s because it’s not popular. Yes, two GOP governors, Rick Scott and Phil Scott of Florida and Vermont respectively have passed anti-gun laws. They betrayed Second Amendment principles. If betrayal is the only way to get red state governors and lawmakers to bolt from the NRA, I’m not worried. Not many would go down this road Rick and Phil took on this issue.

March for our Lives and their appropriated Holocaust remembrance slogan will vanish into the ether soon because in the end, there is nothing that’s going to change our defense of our constitutional rights.

The six million members of the NRA remember all the brave men and women who died fighting for our country and gave us our freedom. We stand with the families and loved ones of these heroes today and every day. They will never be forgotten. ???? #memorialday #neverforgotten pic.twitter.com/kPXPg8KHy6