Here's What North Korea Wants From The U.S. Before It Ends Nuke Program 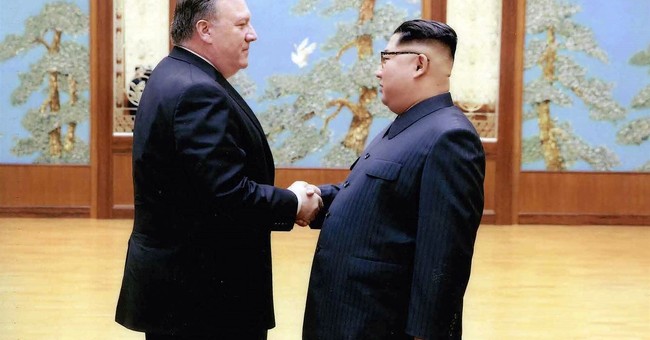 America’s left wing could get slapped in the face like never before if these Korean peace talks actually accomplish the denuclearization of the peninsula and the end of the decades-long war that’s kept both nations (and the world) on edge. The Korean War was a three-year bloodbath before an armistice ended the carnage. The war has not yet officially ended. Since then, South Korea has become a technological hub, with a modern military and a booming economy that catapulted them into the G-20. They’re members of the trillion-dollar club, whereas North Korea, the world’s largest prison, is a communist hellhole, fraught with human rights abuses. It’s an economically backward nation, one that we really don’t know about concerning the actual socioeconomic situation of the country. What we do know is that they have nuclear weapons, which they’ve used expertly to capture the world’s attention in order to gain more food and economic aid.

South Korea has heaped much praise on President Trump for bringing the North Koreans to the table, even suggesting that he should be awarded the Nobel Peace Prize, something that will surely cause liberal heads to explode. The series of sanctions slapped against them for missile tests, with added Chinese pressure caused North Korea to renew negotiations. One of their big demands is that the U.S. pledge to never invade North Korea. The U.S. reportedly had a similar agreement with Cuba; the Soviet Union/Cuba agreed to remove the nuclear weapons on the island in exchange for a non-invasion commitment from the U.S., ending the Cuban Missile Crisis (via NYT):

Keeping diplomatic developments coming at a head-snapping pace, the South Korean government said on Sunday that North Korea’s leader, Kim Jong-un, had told President Moon Jae-in that he would abandon his nuclear weapons if the United States agreed to formally end the Korean War and promise not to invade his country.

In a confidence-building gesture ahead of a proposed summit meeting with President Trump, a suddenly loquacious and conciliatory Mr. Kim also said he would invite experts and journalists from South Korea and the United States to watch the shutdown next month of his country’s only known underground nuclear test site.

In Washington, Trump officials spoke cautiously about the chances of reaching a deal and laid out a plan for the dismantling of the North’s nuclear program, perhaps over a two-year period.

That would be accompanied by a “full, complete, total disclosure of everything related to their nuclear program with a full international verification,” said John R. Bolton, Mr. Trump’s new national security adviser.

The apparent concessions from the youthful leader were widely welcomed as promising signs of ending the standoff on the Korean Peninsula, frozen in place since fighting in the Korean War ended 65 years ago.

But skeptics warned that North Korea previously made similar pledges of denuclearization on numerous occasions, with little or no intention of abiding by them. Mr. Kim’s friendly gestures, they said, could turn out to be nothing more than empty promises aimed at lifting sanctions on his isolated country.

A South Korean government spokesman, Yoon Young-chan, provided remarkable details of a summit meeting the two Korean heads of state held on Friday, when Mr. Kim made history by becoming the first North Korean leader to set foot in the South.

“I know the Americans are inherently disposed against us, but when they talk with us, they will see that I am not the kind of person who would shoot nuclear weapons to the south, over the Pacific or at the United States,” Mr. Kim told Mr. Moon, according to Mr. Yoon’s account.

Is this too good to be true? It remains to be seen. North Korea has made such overtures before and nothing has come of it. Bolton has said that for this to work, North Korea has to agree to Libyan-style disarmament, where then-leader Muammar Gaddafi gave up his weapons of mass destruction program. We’ll see what happens, but while many should be cheerleading this administration to strike this deal—a great many on the Left and their allies in the media would hope this fails to give their side a better chance in the upcoming elections and to ensure that Trump does not one up Obama, whose Iran nuclear deal is falling apart. Trump cannot win a Nobel Peace Prize. That would destroy most of the left wing talking points against Trump, that he’s an unstable madman whose Twitter account will cause a nuclear apocalypse.