Brace Yourselves: Democrats Could Totally Self-Destruct If Trump Wins A Nobel Peace Prize (So, Grab Some Popcorn) 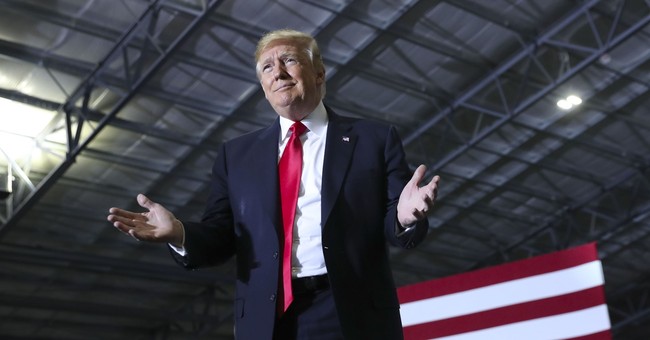 The Korean War is coming to an end. It’s the conclusion of the last major chapter of the Cold War. Both sides said there’s an agreement on a peace treaty and the denuclearization of the peninsula. It’s something that has eluded the Bush and Obama administrations. Funny—Trump mocks North Korean dictator Kim Jong-un, called him “rocket man,” and sets off a panic among Democratic circles that his tweets could set off nuclear world war III. Why? Well, because North Korea threatened to do so, which they’ve done for years. It shouldn’t be taken seriously—and it wasn’t; the markets really didn’t have seismic shifts over this. Everyone thought Trump was mishandling this crisis, and in the end, both sides have agreed to officially end the war.

So, once again the media and the Democrats were wrong. And now, President Trump is being considered for a Nobel Peace Prize. Could you imagine how the Left would react if he were to win it? President Obama won it and he escalated a war in Afghanistan, failed to confront ISIS, and dithered on Syria. Obama did nothing when the Russians annexed Crimea. Did nothing when chemical weapons were used in Syria as well. Who does South Korea give immense credit for bringing North Korea to the bargaining table? Donald J. Trump. Besides the Twitter exchanges, the Trump White House slapped North Korea with a series of sanctions over missile tests. And this isn’t just South Korea, or conservative media, saying Trump deserves credit, CNN admits it as well:

Any way you cut it, President Donald Trump is entitled to significant credit for Friday's historic opening between the two Koreas.

Whether he deserves as much as he's claiming or whether he's wise to bullishly declare a new era of denuclearized peace on the peninsula seems much more doubtful.

Still, the summit between North Korean leader Kim Jong Un and South Korean President Moon Jae-in keeps alive the possibility of a legacy win for Trump that would rank as one of the top presidential achievements since World War II.

If he were to preside over the verifiable destruction of the North's nuclear and missile programs, formally end the 1950-53 Korean War and usher in the destruction of the world's last Cold War-era frontier, Trump would claim a feat that has eluded all of his most recent predecessors.

The administration succeeded in enacting the most stringent sanctions regime yet imposed on North Korea -- and crucially got more buy in from China for more pressure on its nominal ally North Korea than ever before.

If those sanctions are indeed behind North Korea's decision to come to the table, Trump's effusive praise of China's President Xi Jinping during a state visit last year, for which he was widely criticized, could be validated.

Given the stakes, and the chance of averting what could be a murderous war on the Korean peninsula, it's possible that even in Washington's divisive political climate, everyone might be rooting for Trump to succeed.

“Everyone might be rooting for Trump to succeed,” I wish I could believe that, but I’m not holding my breathe. From the Democratic-media complex to a cadre of government officials—mostly Obama holdovers—leaking sensitive information to the press to hamstring the administration, and the recent character assassination of Rear Admiral Ronny Jackson, Trump’s Veterans Affairs secretary nominee, a lot of behind the scenes politicking could happen.  On top of what could be a long and arduous diplomatic journey with the Koreas, the Trump White House has to deal with a hostile press corps at home and a political party that will do just about anything to destroy his agenda. We’ll see, but Trump winning a Nobel Prize would be a popcorn-worthy event. Here’s a man that many on the Left thought would bring war and misery to the world. If Trump could pull this off, the U.S. would indeed be winning, so much winning we might get tired of it, right?

Guy will have a more in-debt post this week about how the Korea talks, the economic/jobs report, and the recent confirmation of judges has earned the president high grades.