The Bernie-ization Of The Democratic Party? 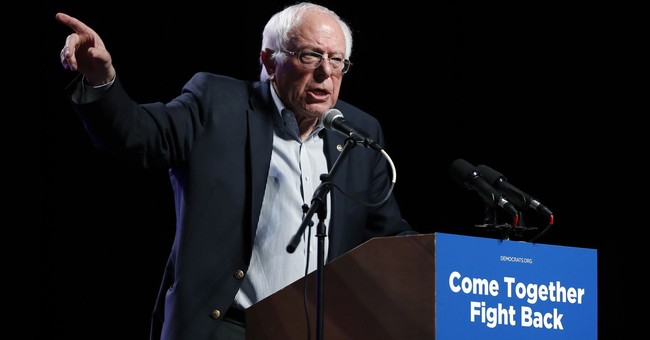 The Democrats could very well deliver a walloping to the GOP come November. We’ll have an endless cycle of how liberals took the country back, how the Trump era is over, and how the Democrats are bound to win 2020. The latter part is dubious at best. And whatever the case it’s not going to be the end of conservatism. Remember when everyone said that in 2008? Wrong! Democrats have momentum going into 2018. That’s not in dispute, but who’s their new standard bearer? It’s not Hillary. A large and growing portion of the progressive Left hate her. It appears that Bernie Sanders is leading that effort. Well, at last his policies positions appear to be getting mainstreamed among Democrats. The most robust in terms of support, is Bernie-care; a $32 trillion universal health care program that would hurt the working poor. The jobs for all and free tuition proposals from Sanders are less popular, but Berniecare and the minimum wage hike are more palatable to Hill Democrats. Still, study after study has shown minimum wage hikes while good on paper, are a complete disaster for workers, with fewer hours worked, less money taken home, and fewer job opportunities. It’s a complete disaster, but other states are following suit with their own increases to the minimum wage.

On a side note, the abortion issue has seen the party gravitate to the Left as well, especially on partial-birth abortions. The most recent candidate to signal support for late term abortion was Hiral Tipirneni in Arizona’s 8thcongressional special election; she lost.

Is this overall shift to the Left happening because the Democratic Party thinks Hillary Clinton’s more pragmatic approach—and I’m being kind here—failed? No, but it’s a sign of where their base is grounded that fuels the shift. The Democratic Party is a mostly regional one. Hemmed in by the coasts and the cities, their ranks are loaded with the overly educated. These people are insufferable, confident in their self-righteousness that their way of living is the right one, though few could actually afford it outside of the suburbs. Coal miners are part of the old world, maybe even evil for they do to the environment.

These are the people who lecture us about how eating hamburgers are terrible for the environment, while sipping on their fair trade coffee, with a copy of James Comey’s book in their NPR tote bag. And these people are the abortion without apology or exception crowd; the resistance crowd; the Trump is a Russian agent crowd; the health care for everyone and Venezuela isn’t that bad crowd; and make the minimum wage $15 or even $50/hour crowd. The Democratic Party’s base is loaded with professional urban elites, who have little to no fear of socialist ideas, despite its history of failure. Granted, the Bernie crowd is adamant in their belief that Hillary was not left wing enough. At the same time, ironically this crew might not as flexible as Bernie. Sanders, for all his unabashed leftism, is also somewhat pragmatic himself when he endorsed a Omaha mayoral candidate, who was anti-abortion. Why? He knows Democrats in rural America toe a more conservative line. So, it’s going to be interesting if the apparent Berning of the Democratic Party will afford such flexibility when this party and their clown car of leftists venture outside of the cities and into real America.