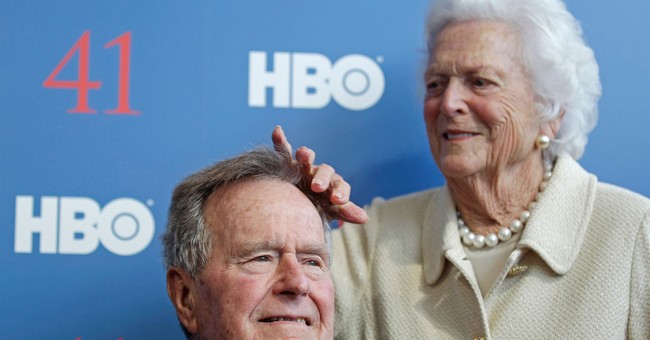 Fresno State University Professor Randa Jarrar was made famous when she tweeted, “Barbara Bush was a generous and smart and amazing racist who, along with her husband, raised a war criminal. F*** outta here with your nice words.” Former First Lady Barbara Bush passed away on April 17 at the age of 92.

It set off a firestorm. Jarrar protected her account. She’s a tenured professor who makes $100,000/year, though the university issued a statement saying that no one is untouchable, even tenured staff.

Since the controversial tweets, an internal review was launched and several donors reportedly considered withdrawing their support (via Fox News):

Several donors to Fresno State are reportedly considering whether the university deserves their contributions.

Ed Dunkel Jr., who made sizable financial contributions to Fresno State, said he will await the outcome of the controversy before deciding whether to close his checkbook.

“I have a lot of friends that I've been talking to, and these are people who donate now and talking about holding back, and some are even questioning whether to send their kids to Fresno State," Dunkel told the Fresno Bee.

"I admire and have a lot of respect for President (Joseph) Castro and huge affection for Fresno State," Dunkel said. "But I have huge concerns. This represents such an embarrassment to the university and the community. It's hard to believe this is an isolated thing that just happened. I have to imagine people previously knew of this person's character and what she's about."

Well, regardless, Ms. Jarrar will keep her job. It was announced earlier today (via Daily Wire):

On Tuesday, Fresno State University announced that the professor who celebrated the death of Barbara Bush and who promoted acts of domestic terrorism will face no disciplinary actions from the university.

Fresno State President Joseph Castro said that after reviewing the "facts," the university will take no disciplinary action against Jarrar because she did not violate any university policies and she was acting in a "private capacity."

When the controversy first erupted, Castro said in a statement that while Jarrar’s remarks are not in line with the values of the university, she made them as a private citizen:

“On behalf of Fresno State, I extend my deepest condolences to the Bush family on the loss of our former First Lady, Barbara Bush.

We share the deep concerns expressed by others over the personal comments made today by Professor Randa Jarrar, a professor in the English Department at Fresno State. Her statements were made as a private citizen, not as a representative of Fresno State.

Letter by Fresno State President Joseph I. Castro on the conclusion of the review regarding professor: pic.twitter.com/Z3bQNYhl9Q

I mean, I guess we shouldn’t be shocked. At the same time, I don’t think Jarrar should have been fired. She has the right to disseminate awful opinions in her own time; this is the free speech test. You’re going to have to tolerate and accept that not everyone has the same views as you do. Some people are way the hell out there. College is a time to be uncomfortable. It’s a time to be really controversial and hear people with whom you have intense disagreements over policy, pretty much anything. Robby Soave of Reason had a good post defending Jarrar’s right to be terrible:

Jarrar's comments are constitutionally protected speech. Fresno State is a public university, and its professors enjoy broad free speech protections. Students, other professors, and the broader Twitter community should feel free to vocalize their disapproval of her comments, but Jarrar shouldn't lose her job or be formally sanctioned by Fresno officials.

Jarrar also posted a telephone number on Twitter, leading critics to believe it was hers. In reality, it was the line for Arizona State University's crisis hotline. This prank may present a stronger case for disciplinary action than the anti-Bush comment, though the latter is what everybody seems mad about.

Jarrar is still defiant, saying she regrets nothing (via NY Mag):

In spite of all the backlash, Jarrar told the Cut she “absolutely” stands by her comments.

Jarrar also says she only brought up the issue of her tenure in the first place after several people told her she was unfit to teach college students. “Some may characterize those tweets as gloating,” she explained. “I would say that when a woman states any facts about her employment, she is usually met with charges of arrogance.” She added that her salary, which she came under fire for sharing, is publicly listed.

Ultimately, Jarrar didn’t expect her comments to blow up to the extent that they did and expresses a desire that the conversation could’ve been framed differently. “Again, because I can be at times overly optimistic or perhaps idealistic, I wish the conversation we were having as a nation today was about how we mourn problematic figures,” she said. “Instead, it has become a kind of mourning of our rights to free expression.”

Let’s move on now. Both sides have vented. And we’re right back where we were when this first erupted. Jarrar is staying, as she should. Let the Left own this nonsense, of being the knee-jerk reaction crowd, the triggered crowd, the anti-free speech crowd, and the snowflake/safe spaces brigade. Let them howl about terminating people with whom they despise for simply holding a different point of view. This is higher education. These people are already insufferably liberal. This reaction should not have been a shock. You want to deliver a punch to the Left, vote in the 2018 midterms—and don’t vote for the liberal candidate.