Terror At 30,000 Feet: One Dead After Engine Explosion On Southwest Flight, Sent Shrapnel Through Aircraft 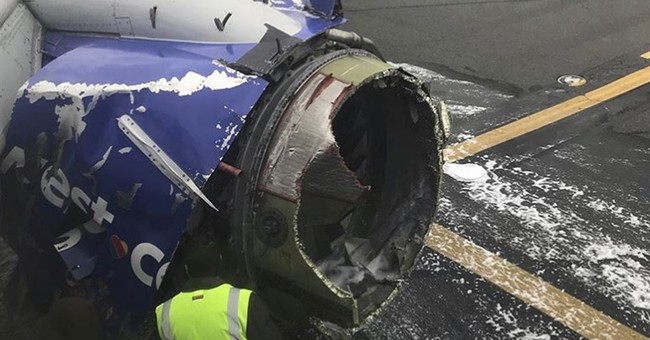 A Southwest Airlines flight from New York to Dallas turned tragic when an engine on the 737 exploded. As it came apart, it sent shrapnel through the fuselage. The plane depressurized, causing oxygen masks to de deployed. It was able make an emergency landing in Philadelphia. National Transportation Safety Board is investigating and reported that one person has died. Several others were also injured during the incident (via Associated Press):

What a flight! Made it!! Still here!! #southwest #flight1380 pic.twitter.com/Cx2mqoXVzY

A Southwest Airlines jet apparently blew an engine at about 30,000 feet and got hit by shrapnel that smashed a window and damaged the fuselage Tuesday, killing a passenger and injuring seven others, authorities said.

The plane, a Boeing 737 bound from New York to Dallas with 149 people aboard, made an emergency landing in Philadelphia just before noon as passengers breathing through oxygen masks that dropped from the ceiling prayed and braced for impact.

“I just remember holding my husband’s hand, and we just prayed and prayed and prayed,” said passenger Amanda Bourman, of New York. “And the thoughts that were going through my head of course were about my daughters, just wanting to see them again and give them a big hug so they wouldn’t grow up without parents.”

National Transportation Safety Board chairman Robert Sumwalt said one person was killed. It was the first passenger fatality in a U.S. airline accident since 2009, Sumwalt said.

Seven other people were treated for minor injuries, Philadelphia Fire Commissioner Adam Thiel said. He said there was a fuel leak in one of the engines when firefighters arrived and a small fire was quickly brought under control.

The Federal Aviation Administration said the plane landed after the crew reported damage to one of the engines, along with the fuselage and at least one window. The NTSB sent a team of investigators to Philadelphia.

There are reports that a woman was partially yanked out of the cabin when the aircraft depressurized. It's not confirmed if this was the woman who was killed in this incident, but NBC10 Philadelphia reported that other passengers were able to pull her back into the cabin, though she suffered serious injuries and was "covered in blood."