Is CNN Serious About This Story Of How The Anti-Gun March For Our Lives Event Was Organized? 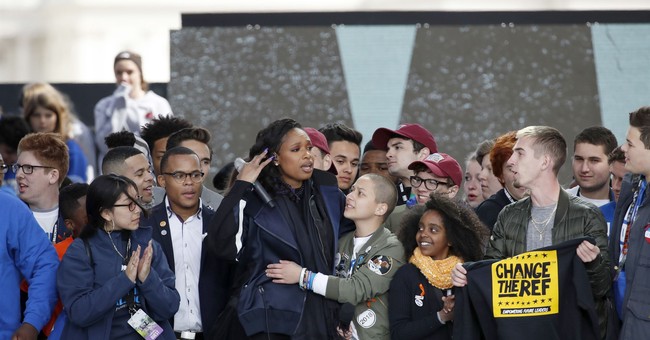 So, is this really a serious story by CNN? I know—the answer is probably self-explanatory, but here we go with the network that’s obsessed with apples, but constantly slips on the banana peels. This week, they wondered how the Parkland Three—Cameron Kasky, Emma Gonzalez, and David Hogg—could have mobilized 200,000 people to Washington D.C. for March for Our Lives. I mean without the backing of the Hollywood Left, the liberal news media, the Democratic Party, and liberal political operatives—how could they have done this? I’m just stunned (I’m being sarcastic) (via CNN):

A GoFundMe campaign to support the rally raised more than $1.7 million in three days on top of $2 million in private donations from Hollywood personalities including George and Amal Clooney, Oprah Winfrey, Steven Spielberg and Jeffrey Katzenberg.

The funds would make the March 24 rally possible, paying for supplies, equipment and coordination of the massive event. As of Sunday, more than 42,000 people had donated nearly $3.5 million to the online fundraiser.

As #NeverAgain supporters set their sights on the Washington rally, partner organizations stepped up.

Giffords, the gun safety advocacy group named for congresswoman Gabrielle Giffords, a mass shooting survivor, provided transportation to Washington for some Stoneman Douglas families with the help of New England Patriots CEO Robert Kraft, who provided the team's jet to help families get to Washington.

With only the Democratic party, the Women's March, major anti-gun advocacy orgs, full support and marketing by the media, Social Media support and promotion and $500,000 from Oprah.

I don't know how they did it. https://t.co/AoSTjPlSmV

So, has CNN ever heard of astroturfing? George Clooney, Steven Spielberg, Oprah Winfrey, and Jeffrey Katzenberg each contributed $500,000. So, the $3.5 million, which certainly had quite a few donations, at least 18,000, was mostly bankrolled by the Hollywood Left. The NAACP also participated in getting people to the event; even the mayor of Baltimore said that private donors offered to pay the $100,000 price tag to use 60 buses to bring 3,000 students to the capital to protest.

Yeah, when the Democratic Party, their progressive allies, and the media is all about bashing gun rights and the Second Amendment, I’m shocked that these kids were able to pull this off in five weeks. Totally shocked. Also, totally shocked that the news networks decided to gush over how the March for Our Lives could be a means to get the Democratic base energized for the 2018 midterms. This is the Democrat-media complex at work, folks. Or maybe it was their public schooling, or something.

Why are the Parkland kids so good at this? Their public school prepared them for it. https://t.co/wxdxghSGLA pic.twitter.com/aTAETcaqH6