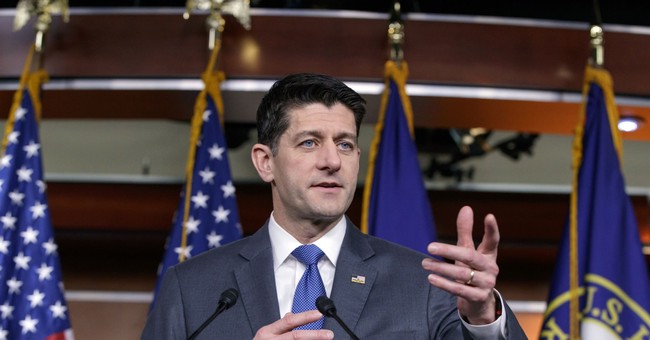 Oh, here we go again. Speaker of the House Paul Ryan is going to rid off into the sunset. Rep. Mark Amodei (R-NV) kicked off the rumor mill earlier today, a telling local news outlet that Ryan will be out…in 30-60 days. House Majority Whip Steve Scalise (R-LA) will take his place, according to the Hill:

Rep. Mark Amodei (R-Nev.) told a local news station that there is a “rumor” that Speaker Paul Ryan (R-Wis.) will resign soon, stepping up speculation about the Speaker’s political future.

“The rumor mill is that Paul Ryan is getting ready to resign in the next 30 to 60 days and that Steve Scalise will be the new Speaker,” Amodei told Nevada Newsmakers, referring to the Majority Whip from Louisiana.

“Now that is interesting, because no one has talked to members on how they are going to vote," he added. "Now, maybe they have talked to all of the members but me. I don’t know, so that is the rumor mill from last week."

Yet, the Ryan camp said the resignation of the speaker isn’t coming.

“The speaker is not resigning,” said AshLee Strong, a Ryan spokesperson.

Also, it’s not like Amodei is in Ryan’s inner circle, so it’s very possible that he’s repeating a rumor that’s been marinating for months with zero evidence.  The allegation that’s he’s thinking about leaving have been cooking since December of 2017. Washington Post reporter Mike DeBonis also added that the Nevada Republican is nowhere near the speaker concerning what he would do on just aout anything relating to this subject tweeting, “Amodei is a mid-level appropriator. No leadership post. He has no idea what is inside Paul Ryan's head. Few if any do.”

Please keep in mind: Amodei is a mid-level appropriator. No leadership post. He has no idea what is inside Paul Ryan's head. Few if any do. That said, the rumor mill has indeed been spinning. https://t.co/sYqgZ3MFV7

The publication added that Ryan leaving mid-way through his term without any scandals weighing him down would be unprecedented:

Republicans would be stunned if there was an outright resignation, in the middle of the term, without any political scandal, and many would suspect they had little chance to win the majority in November.

The traditional route for a House speaker looking toward the exits is to run for another term and announce immediately after the election that he or she is stepping down, particularly if the party loses the majority.