Former Hillary Comms. Director Shares When She Thought Hillary Might Lose The 2016 Election 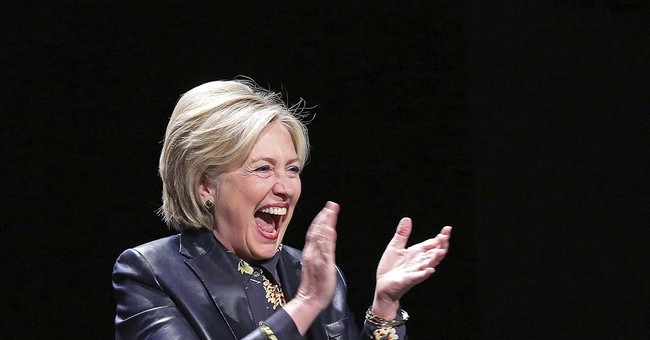 The Left complains that the GOP and the media keep talking about 2016. Sen. Sherrod Brown (D-OH) recently said on NBC’s Meet The Press that it’s time that everyone should move on from 2016. The problem is this circle of friends that is the Clinton universe keeps injecting themselves into the national discussion, and every time they always bring back 2016. It’s no shocker. These people probably are kept awake at night, tortured by how they blew it. It was a very winnable election. But Lady Macbeth had no economic agenda, no message, no political skill, no charisma, and decided to top it all off by calling half the country deplorable.

In India, she repeated those remarks. Her book “What Happened” further detailed the 2016 campaign, blaming the media, Barack Obama, Bernie Sanders, Joe Biden, Russia, the FBI, now-former FBI Director James Comey, and the Democratic National Committee. In essence, it was everyone’s fault, but hers, though she takes full responsibility for being a total garbage candidate. Her communication’s director, Jennifer Palmieri, is going to add to the 2016 throwback mentality, with her new book, “Dear Madam President: An Open Letter To The Women Who Will Run The World,” where she explains the time she felt that the former first lady and now two-time presidential loser would lose in 2016, along with an attempt to smooth over the strong allegation that sexism and misogyny—some of the laziest reasons to explain Clinton’s fall—were to blame for her defeat. Palmieri merely suggest that we don’t know what a women in charge looks like, or something. Okay—maybe that view is just as ridiculous. She made these remarks in an interview with National Public Radio (via NPR):

Our biggest problem for women trying to lead in politics is there's not a model that people are used to seeing that they can compare that woman to and be comfortable with her in that role. Our only model that we have for anyone who runs America, who is the head of the United States, is a man. So, I had a moment where I realized in October during the campaign, I thought "Wow, what we have done is made Hillary a female facsimile of the qualities that we look for in a male president." And ... it was a gut punch ... realizing there was a fundamental design — in October! — and you can't go back and fix it ... And I think that people's distrust of her isn't that everybody is sexist or misogynist; she vexes people and they don't know what to make of her... because I think they don't know what a woman in charge looks like.

We were trying to present her with these qualities that you're used to seeing in a male president: That she's strong enough, that she can handle national security, that she's tough enough that Donald Trump can come after her and try to humiliate her and she's never going to let it show. And I think she had to do that. I do think that the first woman nominee had to prove that she could do the job the way a man would, but that robbed her of a lot of her own authenticity.

The one time I thought that we were going to lose was actually in early September of 2016. We had had a bad August ... and then Hillary came down with pneumonia herself. Trump had just kind of hit his stride. Bannon had been named CEO, he [Trump] was being more disciplined. This was before the debates started. And I thought, "Why do we think that we're going to be the ones that can stop this guy?" He just rolled over 16, 17 candidates on the Republican side. It seemed to me, we're going to look back in 2016 and say the only possible outcome with Trump wins.

On the latter part, very true, but this whole notion of not knowing what a women in charge looks like is a bit tiring. Yes, there is a point that more women need to be in leadership positions, but we’ve seen from across the board female leaders past and present that embodied those qualities. I have a woman as a boss. My mother, sister, and sister-in-law are women who you seriously don’t want to mess with—it’s total crap that there are no examples of women taking names, leading, and kicking ass. There’s also Sheryl Sandberg at Facebook, Nikki Haley at the United Nations, Margaret Thatcher of the United Kingdom, and Boudica in the revolt against the Romans. I don’t think it’s that the electorate doesn’t know what a women in charge looks like, it was more of they didn’t want that woman in charge because she was seen as inauthentic, dishonest, and ultimately unlikable.

The authenticity problem was established well before the general election. The email scandal entrapped her as dishonest way before the Democratic primaries had concluded. She was for the Trans-Pacific Partnership, a huge free trade agreement, while working for Obama, and then decided to run away from it. She said that female victims of sexual abuse and assault ought to be believed, though that was not her opinion when scores of women accused her husband of sexual misconduct, one of which included rape.

It was a throwback to the 1990s—where she was still not all that popular with the voters. She saw an uptick when Republicans overreached on the Monica Lewinsky scandal. Ironically, when she wasn’t the one making the headlines, her approval went up. The more she remained the limelight, like when you run for president, it dropped like a rock. She remains below 40 percent in the approval ratings. While her majesty might want to vent and whine about 2016, the best path for her rehabilitation might be taking a page from George W. Bush, which is to just go away.

At the same time, please don’t, Mrs. Clinton. You’re the GOP’s Red Bull. You’ll always energize us to come out and beat your candidates and your agenda items. We did with Clintoncare and your presidential hopes and dreams.