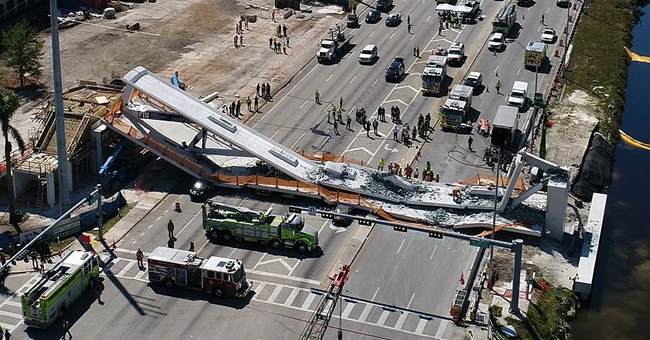 Last Thursday, a pedestrian bridge at Florida International University collapsed outside of Miami. At the time, four people were confirmed dead. That number has tragically been increased to six. There are two eyebrow raising issues concerning his tragedy. One is that the FIU pedestrian bridge was funded by an Obama-era federal grant called Transportation Investments Generating Economic Recovery. The Department of Transportation doled out the money in what has been reported as a sketchy politicized review process. Those who benefitted from these grants represented both Democratic and Republican districts. It was part of the Obama stimulus program. Reason has more:

In 2013, the FIU was awarded $11.4 million in TIGER money for its University City Prosperity Project, which included the pedestrian bridge. Some 52 projects were awarded $458 million in that round of TIGER grants—known as TIGER V—using methodology that was later criticized by the Government Accountability Office (GAO) for violating DOT's own standards.

DOT staff are tasked with evaluating all applications to the TIGER program for how closely they adhere to several "desired long-term transportation outcomes," including economic competitiveness, state of good repair, livability, environmental sustainability, and safety. Each project is assigned a rating that ranges from acceptable to highly recommended.

A 2012 report from the Reason Foundation, which publishes this website, found that 40 percent of the grants in the first two TIGER rounds went to districts represented by Republicans on the House Transportation and Infrastructure Committee. The four highest-ranking Democrats on the same committee each received at least one TIGER grant.

A message from President Rosenberg. Tomorrow we will have a moment of silence at 1:47p.m. Please join us wherever you are and keep the victims and the families in your thoughts. pic.twitter.com/P17gxhVWHt

There’s also this tidbit that an engineer for the bridge reported that there was cracking on the bridge in a voicemail sent to Florida’s Department of Transportation. The official who received this voicemail was out on assignment and did not hear the message until Friday. The engineer also said he doesn’t think it was a safety concern. That assessment turned out to be incorrect (via WaPo):

A lead engineer responsible for a pedestrian bridge that collapsed near Miami left a voice mail for a state transportation official warning of “some cracking” two days before the structure crashed, state officials said Friday night.

The engineer with the private contractor FIGG Bridge Engineers did not consider it a safety issue, he said in the call. The message was not retrieved until Friday because the Florida Department of Transportation official to whom the voice mail was directed was out of the office on assignment, the state agency said. The message about the bridge being built to connect Florida International University with a neighboring city was left on a land line.

“Hey Tom, this is Denney Pate with FIGG bridge engineers. Calling to, uh, share with you some information about the FIU pedestrian bridge and some cracking that’s been observed on the north end of the span, the pylon end of that span we moved this weekend,” the engineer said, according to a transcript of the call released by the Florida Department of Transportation.

“Um, so, uh, we’ve taken a look at it and, uh, obviously some repairs or whatever will have to be done but from a safety perspective we don’t see that there’s any issue there so we’re not concerned about it from that perspective although obviously the cracking is not good and something’s going to have to be, ya know, done to repair that.”

Huh. Wonder why this Tweet just disappeared a minute ago. @wupton pic.twitter.com/8zH8omceGp