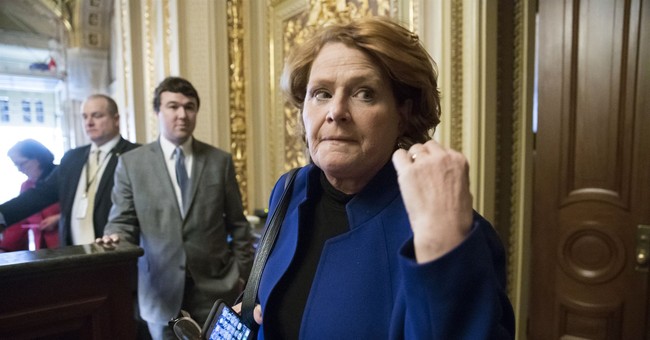 North Dakota Democratic Sen. Heidi Heitkamp is not thrilled about Hillary Clinton totally trashing Americans on foreign soil. In India, the former first lady and two-time presidential loser went on another sour grapes rant, pretty much saying while she lost, her campaign won the parts of the country that matter. She didn’t stop there. She proceeded to continue to trash Middle America, describing those she couldn’t convince to support her because she’s a total garbage candidate as “backwards,” and that married white women are enslaved by their husbands concerning how they vote. Yeah, talk about top-notch messaging skills there, Hillary. It’s one of the most absurd lines from feminist circles; that women who vote Republican are simply brainwashed or stupid. And they wonder why feminism has a branding problem.

“His [Trump] whole campaign: 'Make America Great Again' was looking backwards,” said Clinton. “You know, you didn't like black people getting rights, you don't like women, you know, getting jobs, you don't want to you know see that Indian American succeeding more than you are, whatever your problem is, I'm going to solve it.”

The people who supported Trump are those who were more or less abandoned for the better part of a quarter century. Also, millions of these Trump supporters also voted for Barack Obama. Heitkamp, who is vulnerable in her 2018 re-election bid, said that Hillary couldn’t leave politics soon enough concerning her remarks. The North Dakota Democrat said this on her brother’s radio show this week (via CNN):

North Dakota Democratic Sen. Heidi Heitkamp said on a radio show this week that it's past time for Hillary Clinton to exit the political landscape.

The comment came as Joel Heitkamp pointed to Clinton's remarks during a recent speech in India about why the middle of the country voted for Trump in 2016.

North Dakota went heavily for Trump in 2016. On top of that, she voted against the Trump tax bill, which offered relief to working and middle class families. Sixty-one percent approve of the bill, with another 51 percent saying that the economy has improved from last year.