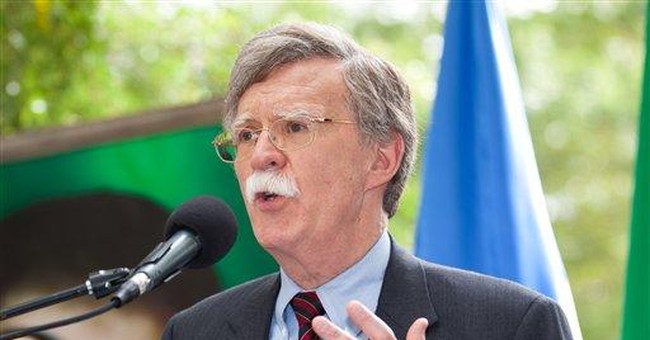 It’s here. The 2018 midterms are upon us. The tide could be shifting thanks to the continued success of the GOP tax plan. Looked at as a possible albatross for Republicans, the legislation has broken 50 percent approval, far from the dismal sub-40 numbers it registered in December when the bill passed. For Democrats, they smell blood in the water, buoyed by a strong number of state legislature wins in Trump districts—they see an opportunity to flip the House. The GOP control Congress, with a Republican president. History shows they’re bound to gain seats, yet again—this GOP tax bill could punch them in the mouth.

With ISIS defeated, Syria and the Middle East remain front and center. Trying to recalibrate things with Russia, along with ongoing diplomatic tango with North Korea and Iran, is another factor. For former UN Ambassador John Bolton, he’s picked a slate of candidate for 2018 that he feels would serve America’s national security priorities.

“In these dangerous times and as global threats mount, it is important that we have leaders in Congress who understand the international arena and who have experience protecting our nation on the front lines,” said Ambassador Bolton in a statement on the candidate endorsements. “The experience that these veterans have provides them with a unique understanding of the threats we face from international terrorism and rogue regimes such as North Korea and Iran.”

The statement came with the names of the endorsed candidates, along with short remarks from the ambassador as to why they’re going to be getting a check from his PAC. Every single one has served in the U.S. military:

“As a veteran, Representative Jeff Denham knows from personal experience that the cost of freedom is high,” said Ambassador Bolton. “He understands the importance of funding our military to keep America and her allies safe, and he will continue to advocate for our nation’s security as a member of Congress. I fully support his re-election to Congress.”

“Representative Steve Knight knows that our national security should remain a top priority,” said Ambassador Bolton. “As a veteran of both the United States Army and the Los Angeles Police Department, I know Steve will continue to support our armed servicemen and women in order to protect our nation and her allies from both global and domestic threats."

"Representative Neal Dunn has used his time in Congress to advocate for a strong, and well-funded military," said Ambassador Bolton. "We need the continued leadership of veterans like Neal who understand that America must develop a comprehensive military strategy to protect against Islamic terrorism at home and abroad. That is why I am proud to endorse his candidacy for re-election to Congress."

“As a veteran of the U.S. Marines serving in Congress, Representative Mike Bost has proven that he is committed to a strong national defense,” said Ambassador Bolton. “He is dedicated to ensuring our military is prepared to meet the global challenges of today and the threats of tomorrow. I believe we need more individuals who understand the importance of national security as Mike does, and I am happy to endorse his candidacy for re-election to Congress.”

“Representative Adam Kinzinger is a veteran with combat experience in Iraq and Afghanistan and knows what it takes to keep our nation safe,” said Ambassador Bolton. “He also recognizes that Israel is one of our strongest allies in an unstable region where Iran poses a significant threat. I have full confidence that Adam will continue to lead our nation with sound foreign policy decisions and that is why I am endorsing his candidacy for re-election to Congress.”

“Representative Jim Banks, a veteran who has served in Afghanistan, knows that a strong national defense is the best deterrent to those who seek to do us harm. He has used his time in Congress to ensure that our military remains strong so that America can project strength to her enemies,” Ambassador Bolton said. “I believe Jim will continue to ensure that America is ready to defend our national interests with a strong foreign policy.”

“Representative Jack Bergman served our country as a three-star general in the Marine Corps. He has drawn on that experience to lead our nation in Congress and to ensure that our military is trained and equipped to defend against any threats that may arise in the complex world in which we live,” said Ambassador Bolton. “As he is someone who has been personally involved in the fight against terrorism, I have full confidence that Jack will continue to advocate in Congress for strong national security policies.”

“Representative Steve Russell has first-hand experience with foreign policy and national security decisions from his time serving in the U.S. Army, and he understands the importance of these decisions,” said Ambassador Bolton. “I believe this is why Steve has been such a strong advocate for our  national defense while serving in Congress and I am proud to endorse his candidacy for re-election.”

“Dr. Mark Green has served on the front lines of the War on Terror as a flight surgeon, most notably on the mission to capture Saddam Hussein. His unique experiences as a veteran of the U.S. Army make him well-suited to make sound foreign policy and national security decisions that will keep America and her allies safe amid a multitude of global threats,” said Ambassador Bolton. “I have full confidence in Dr. Green’s ability to lead and to be a strong voice in Congress.”

“As a former Navy SEAL, Representative Scott Taylor has witnessed first-hand America’s foreign policy in action. His service and experience allow him to make informed foreign policy decisions as a member of Congress,” said Ambassador Bolton.  “We need veterans like Scott serving in Congress and committing to a strong national defense, as Scott has, which is why I am endorsing his candidacy for re-election.”

Bolton PAC has endorsed 34 candidates so far this cycle. In all, the PAC has doled out over $300,000 in campaign donations. For this current slate, $70,000 will be spent among them.