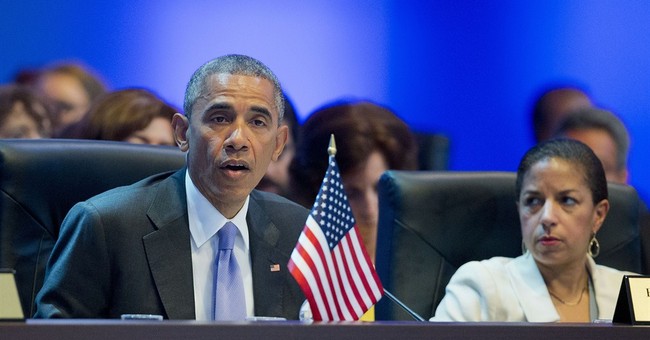 The Senate Judiciary Committee is giving former Obama National Security Adviser Susan Rice until February 22 to answer questions relating to an email she sent to herself prior to exiting from the Obama administration. It occurred during President Trump’s inauguration. The email contains classified information, so it’s a partial disclosure from the Judiciary Committee, but it seems to show that on January 5, 2017, then-President Obama, Vice President Biden, then-FBI Director James Comey, and then-Deputy Attorney General Sally Yates had a meeting in the Oval Office about the fallout from the Russian interference in the 2016 election.

The letter was sent to Ms. Rice from the Senate Judiciary Committee, which included excerpts from her email. The meeting also reportedly centered on the Steele dossier, which has been exposed as an extensive opposition research project subsidized by the Democrats and the Hillary Clinton campaign and executed by a research firm—Fusion GPS—who hired a former British spy to get dirt on Trump. The dossier was also used to obtain a FISA warrant on Carter Page, a former foreign policy adviser to the Trump campaign.

Sens. @ChuckGrassley and @LindseyGrahamSC want to know why SUSAN RICE emailed herself on her last day about a Jan. 5 meeting with Comey, Yates, Obama, Biden re: Russia.

They were wondering whether they couldn't share things with the incoming admin -->https://t.co/TaF67mqBUW pic.twitter.com/MPxtHri9wv

Rice wrote that after being briefed by the intelligence community on Russia’s activities during the election, Obama stressed “the very aspect of this issue is handled by the Intelligence and law enforcement communities ‘by the book’. The President stressed that he is not asking about, initiating or instructing anything from a law enforcement perspective. He reiterated that our law enforcement team needs to proceed as it normally would by the book.”

Rice continued, saying, “President Obama said he wants to be sure that, as we engage with the incoming team, we are mindful to ascertain if there is any reason that we cannot share information fully as it relates to Russia.”

The other portions are classified, but it seems as if Comey agreed to keep Obama in the loop on the possible shielding of information on Russia from incoming Trump officials.

“The President asked Corney to inform him if anything changes in the next few weeks that should affect how we share classified information with the incoming team. Corney said he would.”

Sens. Chuck Grassley (R-IA) and Lindsey Graham (R-SC) added, “It strikes us as odd that, among your activities in the final moments on the final day of the Obama administration, you would feel the need to send yourself such an unusual email purporting to document a conversation involving President Obama and his interactions with the FBI regarding the Trump/Russia investigation.” As a result, they have a few questions that they would like an answer to by February 22. Here are the twelve questions:

1.Did you send the email attached to this letter to yourself? Do you have any reason to dispute the timestamp of the email?

2. When did you first become aware of the FBI's investigation into allegations of collusion between Mr. Trump's associates and Russia?

3. When did you become aware of any surveillance activities, including FISA applications, undertaken by the FBI in conducting that investigation? At the time you wrote this email to yourself, were you aware of either the October 2016 PISA application for surveillance of Carter Page or the January 2017 renewal?

4. Did anyone instruct, request, suggest, or imply that you should send yourself the aforementioned Inauguration Day email memorializing President Obama' s meeting with Mr. Corney about the Trump/Russia investigation? If so, who and why?

5. Is the account of the January 5, 2017 meeting presented in your email accurate? Did you omit any other portions of the conversation?

6. Other than that email, did you document the January 5, 2017 meeting in any way, such as contemporaneous notes or a formal memo? To the best of your knowledge, did anyone else at that meeting take notes or otherwise memorialize the meeting?

7. During the meeting, did Mr. Corney or Ms. Yates mention potential press coverage of the Steele dossier? If so, what did they say?

8. During the meeting, did Mr. Corney describe the status of the FBI's relationship with Mr. Steele, or the basis for that status?

9. When and how did you first become-aware of the allegations made by Christopher Steele?

10. When and how did you first become aware that the Clinton Campaign and the Democratic National Committee funded Mr. Steele's efforts?

12. Did President Obama have any other meetings with Mr. Corney, Ms. Yates, or other government officials about the FBI's investigation of allegations of collusion between Trump associates and Russia? If so, when did these occur, who participated, and what was discussed?

Once the Obama team was out upon Trump’s swearing into office, The New York Times reported that the former administration worked hard prior to their exit to ensure that there were breadcrumbs on Russia and the 2016 election. We’ll see how long it takes to get answers on this mystery email.

Seems to fit pretty neatly with this March 2017 NYT story in which Obama admin officials made a mad dash before leaving to leave a trail of clues for investigators:https://t.co/37dRF63yLr

BREAKING: Supreme Court Strikes Down EPA Plan for 'Transition' Away From Coal Power