NYT Op-Ed: Trump's State of the Union Was Boring And Warmongering 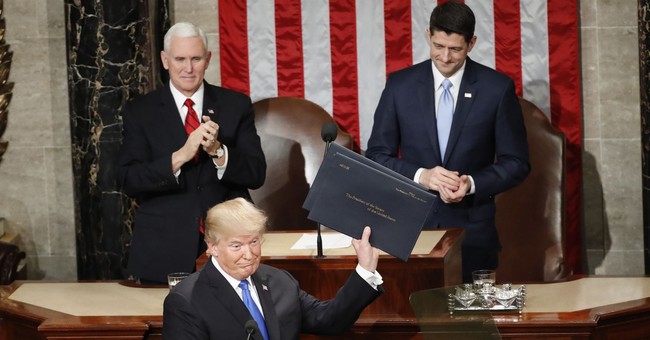 Well, now that the State of the Union is over. Have liberal blood pressures returned to healthy levels? Did MSNBC’s meltdown help; they worked overtime to make sure the progressive base was well sated in their anti-Trump appetites. The best was prior to the speech, liberals had a new rule: whatever Trump says, it’s not presidential. One New York Times columnist, Michelle Goldberg, penned a column to make that known. This was what she wrote after the address:

Trump had in the audience the parents and siblings of Otto Warmbier, an American student who was sentenced to 15 years in a North Korean forced-labor camp, and who died after being sent back to the United States with severe injuries. He seemed to be using Warmbier’s death to propagandize for war: “Tonight we pledge to honor Otto’s memory with total American resolve.”

America survived the first year of the Trump administration more or less intact. Tuesday indicated that our luck could be running out. If the country goes to war in North Korea, future historians will struggle to understand how we sleepwalked into Armageddon behind a man whose own cabinet considers him contemptible.

This State of the Union was the third-longest in the past 50 years. Perhaps never before has something so soporific been so tremendously alarming.

8 in 10 Americans who watched Pres. Trump's #SOTU address felt he was trying to unite the country, rather than divide it. Two-thirds said the speech made them feel proud, though just a third said it made them feel safer, CBS News poll finds https://t.co/SRoN9NzmKE pic.twitter.com/bvyG3myhgt

Well, there won’t be a war with North Korea, a talking point from the Left that’s always entertaining. Second, can something be soporific and alarming or warmongering? The latter two are not typically associated with the somniferous. Whatever the case, this is the liberal bubble. This is the coastal, urban-based bias because Trump knocked this out of the park, according to CBS News. Seventy-five percent of Americans who watched approved of the speech. Even 43 percent of Democrats liked it, though Newsbusters, a wing of the Media Research Center, noted that the network has buried that portion of their poll:

So far, only CBS’s streaming service CBSN has revealed that number. CBSN’s Anne-Marie Green, on January 31, reported the following:

ANNE-MARIE GREEN: So we’re following the latest reaction to President Trump’s State of the Union speech. In a CBS News poll most Republicans watching the speech overwhelmingly approved of the President’s message. While 43 percent of Democrats and 72 percent of independents said that they approved of the speech.

Curiously, that 43 percent figure did not appear on the January 31 editions of CBS This Morning or CBS Evening News. That data point also did not show up in this January 30 CBSNews.com article on the poll results.

In fact, the only mention of the poll results, on CBS’s broadcast programs, came in a 17-second brief by co-host John Dickerson on the January 31 edition of CBS This Morning

Yet, The View’s Sunny Hostin was offended by the speech and was shocked by its warm reception from voters, questioning the polls in the process:

[Meghan] McCain asked Hostin if she was then “surprised” by the positive reaction to the speech.

“Well, I'm shocked, and I’m also shocked at the numbers,” Hostin confessed. Instead of acknowledging that maybe, just maybe, her perspective was more than a little extreme, she seemed to dismiss the polls as skewed:

“You said CBS was 70-something and CNN was 40-something. Who are they interviewing? I don't know,” she shrugged.

Yeah, chalk this one up as another win for the president—big league. He had a good night. Period.