GOP Senator: Yes, We Might Have A Secret Society At DOJ/FBI That's Working Against Trump 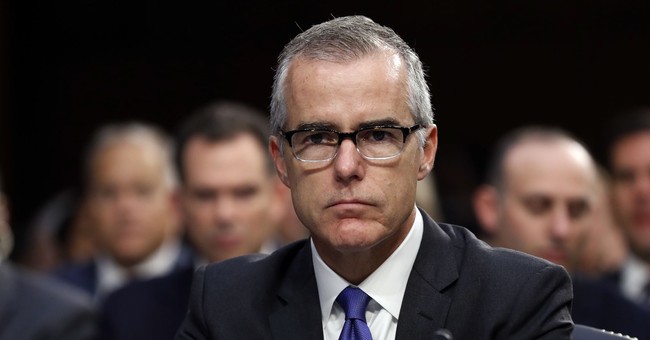 So, it would appear that we have another resistance group within the Federal Bureau of Investigation. Nothing is concrete, but we need answers. First, we had former top counterintelligence official Peter Strzok sending at least 10,000 texts to Lisa Page, a FBI lawyer with whom he was having an extramarital affair. The date of those interactions, all riddled with swipes at Trump and praise for Hillary Clinton were sent between August of 2015 and December of 2016.

Now, that figure has been jacked up to at least 50,000 texts sent between the two and oh yeah—there’s a five-month gap from December 14, 2017 to May 17, 2017, the latter being the date the Robert Mueller was appointed special counsel. The FBI has become a focus since these texts between Page and Strzok became public last December. One text from Strzok sent on August 15, 2016, to Page referenced an “insurance policy” after a meeting with Deputy Director Andrew McCabe. That fueled speculations that the FBI was meddling in the 2016 election, and that the policy was the Trump dossier that some say was used by the Obama administration to spy on members of the Trump campaign.

Now, we have reports that there are secret meetings being held offsite at the FBI (via Fox News) [emphasis mine]:

Two top FBI officials under fire for exchanging anti-Trump text messages during the 2016 election spoke of a “secret society” the day after President Trump's victory, according to two lawmakers with knowledge of the messages.

House Oversight and Government Reform Committee Chairman Trey Gowdy, R-S.C., and Rep. John Ratcliffe, R-Texas, said Monday that among the messages the pair exchanged are references to a “secret society” within the Department of Justice and the FBI.

“We learned today about information that in the immediate aftermath of [Trump’s] election, that there may have been a secret society of folks within the Department of Justice and the FBI -- to include Page and Strzok -- that would be working against him,” Ratcliffe said Monday on Fox News' “The Story with Martha MacCallum.”

“I’m not saying that actually happened, but when folks speak in those terms, they need to come forward to explain the context with which they used those terms,” he added.

“There’s a text exchange between these two FBI agents, these two supposed to be objective fact-centric FBI agents, saying that perhaps this is the first meeting of the ‘secret society,'” Gowdy said.

It sounds off the wall, but an informant who spoke to Sen. Ron Johnson (R-WI), the chair of the Senate Homeland Security Committee, confirmed this allegation was being tossed around. Johnson told Fox News’ Bret Baier this development last night. If true, Johnson said we have a damning case of bias, possibly corruption, at the highest levels of the bureau that will make Mueller’s position untenable; a new special counsel will have to be appointed (via RCP) [emphasis mine]:

"What this is all about is further evidence of corruption, more than bias," Johnson said about the Strzok-Page messages he has so far. "Corruption of the highest levels of the FBI. The secret society -- we have an informant talking about a group that was holding secret meetings off-site."

Host Bret Baier followed up, "Let's stop there. Secret society? Secret meetings off-site of the Justice Department? You have an informant saying that?"

"Correct. Yes," Johnson replied, adding: "We have to dig into it . . . This is not a distraction. This is bias, potentially corruption, at the highest levels of the FBI. Robert Mueller used to run the FBI. He's in no position to do an investigation over this kind of misconduct. So I think at this point, we should be looking at [appointing a new] special counsel."

Make what you will of this, but it’s unseemly at just the notion of FBI agents and other officials at the bureau and DOJ allegedly meeting offsite to discuss ways to resist the Trump White House. These are government employees. They’re part of the federal law enforcement and intelligence apparatus. You can’t get any more apolitical than that on face value. If you can’t do your job under a certain administration, leave. It’s that simple.

UPDATE: Johnson says “secret society” remark was in reference to the texts and the words of the informant. He does not know what they mean, and says his committee will remain focused on Clinton emails.

Ron Johnson tells us his “secret society” comments were based on an informant and the words used in a Strzok-Page text exchange. He acknowledges not knowing what they meant - and says the focus now on his committee is the Clinton email scandal.