Top Democratic Senate Aide On Anti-Semitism: We Don't Care About It 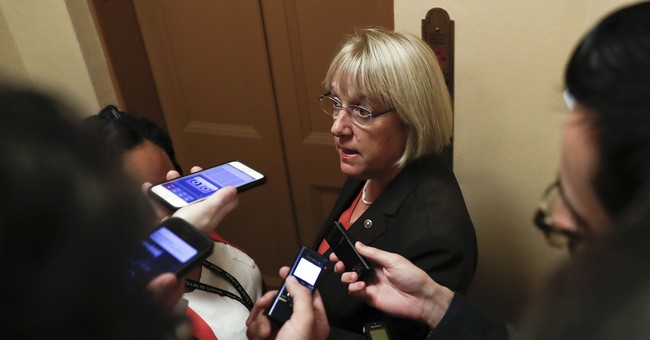 Well, if you want to fight anti-Semitism, don’t count on Sen. Patty Murray’s (D-WA) office apparently. A top aide is reported to have said that Murray’s office doesn’t care about anti-Semitism. It’s all about caring for trans folk, blacks, the disabled, Hispanics, and gays (via Free Beacon) [emphasis mine]:

A senior policy adviser to Democratic senator Patty Murray (Wash.) said her office in the U.S. Senate Committee on Health, Education, Labor, and Pensions does "not care about anti-Semitism," according to two people who attended the meeting.

The HELP committee is currently weighing the nomination of Ken Marcus as assistant secretary for civil rights at the Department of Education. Marcus has been the target of an aggressive campaign waged by leading anti-Israel groups seeking to derail his nomination. Marcus has worked to combat the boycott, divestment, and sanctions (BDS) movement on college campuses and is the founder of the Louis D. Brandeis Center for Human Rights Under Law, a pro-Israel group.

During a meeting on November 28 with Sarah N. Stern, a former colleague of Marcus and president of the Endowment for Middle East Truth, a senior adviser to Murray on the HELP committee told Stern the committee does not "care about anti-Semitism in this office."

"We don't care about anti-Semitism in this office," he said.

Stern's aide Jennifer Dekel confirmed the comments and said she was taking notes during the meeting.

Why not Jewish people? What’s going on here? Last year, Bari Weiss of The New York Times penned an op-ed around the time a Jewish lesbian was forced out of a pride parade in Chicago because her Star of David superimposed on a rainbow flag was causing a problem. In fact, it was triggering some of the attendees. The reason was grounded in the Israeli-Palestinian conflict. Weiss used this as an example when intersectionality goes wrong. Oh, yeah, let’s do a recap of what that is, which Weiss does in her column:

Intersectionality is the big idea of today’s progressive left. In theory, it’s the benign notion that every form of social oppression is linked to every other social oppression. This observation — coined in 1989 by Kimberlé Williams Crenshaw — sounds like just another way of rephrasing a slogan from a poster I had in college: My liberation is bound up with yours. That is, the fight for women’s rights is tied up with the fight for gay rights and civil rights and so forth. Who would dissent from the seductive notion of a global sisterhood?

One of the women who was asked to leave the Dyke March, Eleanor Shoshany Anderson, couldn’t understand why she was kicked out of an event that billed itself as intersectional. “The Dyke March is supposed to be intersectional,” she said. “I don’t know why my identity is excluded from that. I felt that, as a Jew, I am not welcome here.”

She isn’t. Because though intersectionality cloaks itself in the garb of humanism, it takes a Manichaean view of life in which there can only be oppressors and oppressed. To be a Jewish dyke, let alone one who deigns to support Israel, is a categorical impossibility, oppressor and oppressed in the same person.

Is that why some of Murray’s aides don’t care about the vicious discrimination that’s inflicted upon some of the most loyal Democrats in the liberal base?  Well, when it comes to Mr. Marcus' nomination, he's fighting the anti-Israeli BDS (Boycott, Disinvestment, and Sanctions) movement and leads a pro-Israel group. Yeah, sounds like it has a lot to do with it. It takes a certain nerve to say we care about everyone, except those who are facing discrimination because they’re Jewish.  Bravo, left-wingers. Bra-vo.