Booker: The DHS Secretary Is Pretty Much A Nazi Enabler 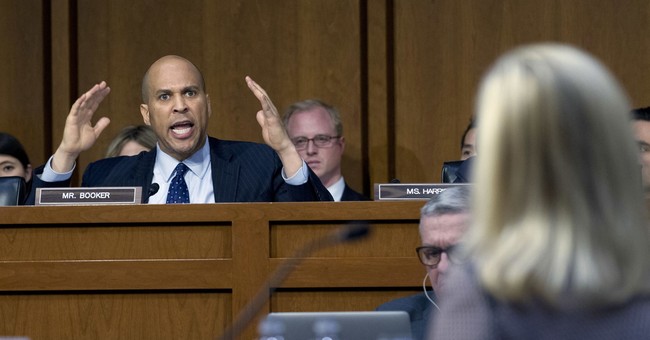 Sen. Cory Booker (D-NJ) is not done with DHS Secretary Kirstjen Nielsen. Not even close. The intense tantrum from Booker at the Senate Judiciary Committee on Tuesday was due to two things; 1) He’s running for president in 2020; and 2) the “tears of rage” that flowed when he heard about the president’s remarks about immigrants from “s**thole countries,” and why are we letting them come here. Nielsen couldn’t recall the president using this exact language when he said it during a meeting between Democrats and Republicans over immigration, the obstacle that could shut down the government later tonight.

Booker went so far as to say that she’s somehow complicit in racism.

“Your silence and your amnesia is complicity,” spewed Booker. Now, he’s equating DHS Secretary Nielsen to a Nazi enabler. Yeah, it’s come to this. Booker made these remarks during a radio hit with New York-based The Breakfast Club (via Free Beacon):

Sen. Cory Booker (D., N.J.) likened Homeland Security Secretary Kirstjen Nielsen to Nazi enablers on Thursday, commenting on what he called her complicity with the White House's bigotry by saying "we know what happened in Europe when people just did their jobs."

When Nielsen appeared before the Senate Judiciary Committee on Tuesday, Booker lit into her for claiming in earlier testimony that she did not recall President Donald Trump referring to African nations as "s—hole" countries in an Oval Office meeting last week.

Booker said he had been "consistent" in his fight against prejudice throughout his career. He has said Nielsen lied under oath during her testimony by saying she couldn't remember Trump's comments and also criticized her for not connecting Trump's rhetoric to right-wing hate crimes.

"If you come after Jews, if you come under Muslims … you come after my fellow American citizens, I will not tolerate it," Booker said. "And she should have been in the same way, as opposed to just doing her job. Well, we know what happened in Europe when people just did their jobs."

That’s not the same thing, senator. And you know it. So, enforcing immigration laws is now Nazi activity? Yeah, I know some liberals think ICE agents are like the Gestapo; it’s still a crap point. Speaking of Jews, it’s funny since an aide to Sen. Patty Murray (D-WA) said they don’t care about anti-Semitism. Is there a Nazi plot happening in that office? The DHS secretary is doing her job, enforcing the law, and protecting our borders. That’s not a harbinger to anything. Booker seems upset that she will do her job, which is just blue state madness. Get a grip, man.