Former Mexican President: Trump’s Mouth Is The ‘Foulest S**thole In The World’ 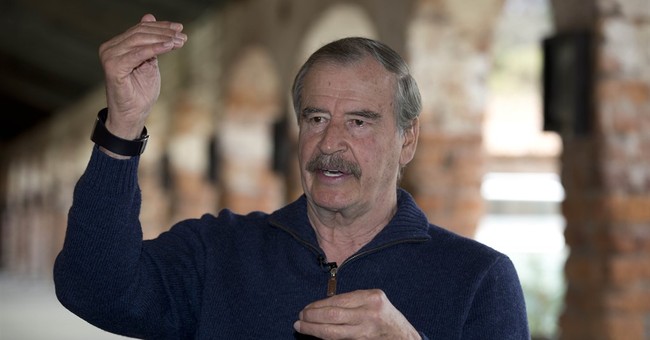 President Donald Trump sent the media establishment and progressive America into full meltdown mode last night where he allegedly said why are we letting in people from “s**thole countries.” These remarks, which are from anonymous sources, were made while the president is trying to hash out a compromise on immigration. We’ll have a post on CNN’s epic meltdown later this afternoon. Let’s just say everything these anti-Trump media personalities were bottling up inside was let loose; they blew a gasket.

Former Mexican president Vicente Fox who tweeted, “your mouth is the foulest sh**hole in the world. With what authority do you proclaim who’s welcome in America and who’s not. [sic] America’s greatness is built on diversity, or have you forgotten your immigrant background, Donald?”

.@realDonaldTrump, your mouth is the foulest shithole in the world. With what authority do you proclaim who’s welcome in America and who’s not. America’s greatness is built on diversity, or have you forgotten your immigrant background, Donald?

“With what authority?” The Constitution of the United States of America. https://t.co/yZVWwEfPGJ

Well, on the authority question, conservative actor James Woods took Fox to school, citing the U.S. Constitution. Second, it’s rich that Fox would be commenting on Trump’s mouth when this guy has been dropping F-bombs on live television.

The border wall is part of the immigration negotiations; Trump has previously said Mexico will pay for it. In various media appearances between 2016 and 2017 on Fusion, CNBC, and CNN, Fox kept repeating the line “we’ll never pay for that f**king wall,” or “I’m not paying for that f**king wall.” It became his rallying cry against this proposal.