NYT Columnist: Yeah, The Anti-Trump Movement Is Crumbling And It's Getting Dumber 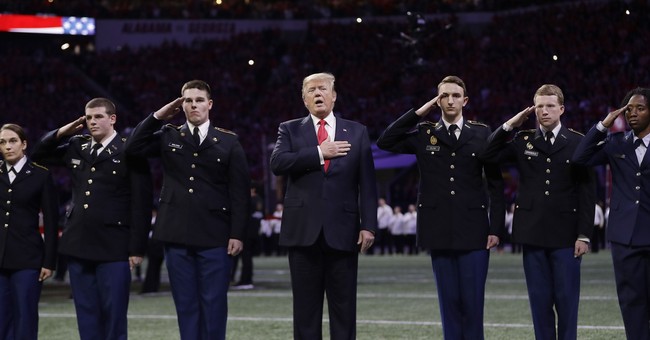 There are those moments that are just crystal clear. For New York Times’ David Brooks, one of them is that the anti-Trump movement is not just smug and insular—it sucks. Not only that, but it’s getting dumber. Brooks says this as someone who is admittedly anti-Trump. Yet, he devotes his entire piece to how this movement is just hopeless. Besides being a confederacy of idiots, Brooks notes that they’re insular. They hardly know anyone who supports the president or works in his administration. If they do, they don’t bring it up over beers. So, it’s a vicious cycle of anti-Trumpers feeding other anti-Trumpers what they think is the real Trump White House. A White House that Brooks also admits surprises people in the sense that mad King George III isn’t being the Resolute desk. In all, the anti-Trump wing of America is crumbling—they just don’t know it yet (via NYT) [emphasis mine]:

It’s almost as if there are two White Houses. There’s the Potemkin White House, which we tend to focus on: Trump berserk in front of the TV, the lawyers working the Russian investigation and the press operation. Then there is the Invisible White House that you never hear about, which is getting more effective at managing around the distracted boss.

I sometimes wonder if the Invisible White House has learned to use the Potemkin White House to deke us while it changes the country.

I mention these inconvenient observations because the anti-Trump movement, of which I’m a proud member, seems to be getting dumber. It seems to be settling into a smug, fairy tale version of reality that filters out discordant information. More anti-Trumpers seem to be telling themselves a “Madness of King George” narrative: Trump is a semiliterate madman surrounded by sycophants who are morally, intellectually and psychologically inferior to people like us.

The anti-Trump movement suffers from insularity. Most of the people who detest Trump don’t know anybody who works with him or supports him. And if they do have friends and family members who admire Trump, they’ve learned not to talk about this subject. So they get most of their information about Trumpism from others who also detest Trumpism, which is always a recipe for epistemic closure.

The movement also suffers from lowbrowism. Fox News pioneered modern lowbrowism. The modern lowbrow (think Sean Hannity or Dinesh D’Souza) ignores normal journalistic or intellectual standards. He creates a style of communication that doesn’t make you think more; it makes you think and notice less. He offers a steady diet of affirmation, focuses on simple topics that require little background information, and gets viewers addicted to daily doses of righteous contempt and delicious vindication.

We anti-Trumpers have our lowbrowism, too, mostly on late-night TV. But anti-Trump lowbrowism burst into full bloom with the Wolff book.

Wolff doesn’t pretend to adhere to normal journalistic standards. He happily admits that he’s just tossing out rumors that are too good to check.

Brooks also admits in his column that this White House is becoming more professional, though he wonders if we’ll get past picking experience over celebrity, excellence over mediocrity, and “truth and a lie.” The anti-Trump wing’s salivation over Michael Wolff’s new book, which seems to be a lengthy collection of rumors, is the crossroads. Will anti-Trump America succumb to the very characteristics they deplore in Donald Trump? Time will tell.

Trump has boosted the economy, passed tax reform, got serious about immigration enforcement, put Neil Gorsuch on the Supreme Court, cut over $8 billion in regulations, created 1.8 million new jobs, played a big role in North and South Korea coming to the negotiating table prior to the Winter Olympics, and defeated ISIS. Yeah, Trump won a war. The middle class of America is getting tax relief because of Trump. Over a million workers are getting bonuses because of Trump. Scores of companies—big and small—have announced they would not just dole out bonuses, but boost U.S. investments and philanthropic donations. For the first time in 11 years, the CNBC economic survey found that a majority polled was optimistic about the economic outlook heading into 2018. Apple now has a window to repatriate some $250+ billion overseas now that the rates were reduced. CEO Tim Cook has always wanted to do this, feeling it was good for the country, but the rates under Obama, which the former president refused to cut, made this transfer impossible. Under Trump and a Republican Congress, the environment is better and the Democrats (and anti-Trumpers) are eating crow.

A lot of good is coming from this White House, and that’s good for the country. In the meantime, maybe this anti-Trump wing of the GOP could warm up to Trump by 2020. Hey, I wasn’t too thrilled about Trump joining the 2016 race. I was deadset against him. The man won me over and by Republican National Convention; it was no longer a conservative vs. non-conservative with Trump. It was whether we could defeat Hillary Clinton. The primaries were over. Trump had the delegates to clinch the GOP nomination. It’s done. It’s over. The next battle was beating Lady Macbeth and the Democrats—and Trump turned out to be the last man standing. You can’t always get what we want, but in the end, beating Hillary is all I, and many, many Republicans ever wanted. For those Republican voters who supported Hillary or Evan McMullin, I still want to know what y’all were smoking, snorting, or freebasing. How could any GOP voter cast a ballot for Clinton? Whatever the case, all I can say to the anti-Trump wing of the GOP is that you’re missing a great show.