Whoa: Over 1 Million Workers Have Received a Bonus Since The Trump Tax Bill Became Law 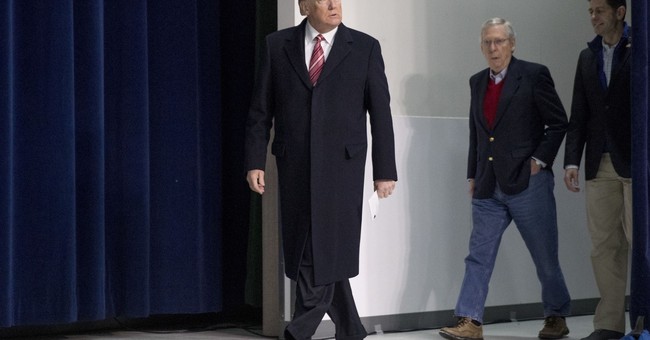 On December 22, President Donald J. Trump signed the most extensive tax reform in three decades. Some said it couldn’t be done. Congressional Republicans united and passed it before Christmas. It was on top of other great economic news. The fourth quarter growth was pretty much at four percent. Consumer confidence was at a 17-year high. Unemployment dropped to its lowest levels in two decades, and for the first time in 11 years, CNBC’s economic survey found that a majority was optimistic about the economy heading into 2018. Not only that, but the tax bill prompted scores of companies to dole out bonuses, increased U.S. investments, and boost philanthropic giving. In some states, like Nevada, it prompted developers to finally move forward on a new resort project that created 11,000 news jobs. It sounds like Rep. Jacky Rosen (D-NV) will have to explain why she didn’t want this to happen.

Paul Bedard at Washington Examiner has compiled a list of over 100 companies that have given at least $1,000 in bonuses to their workers, some cases it’s gone as high as $3,000. In all, over one million workers have received bonuses thanks to Trump’s tax bill:

Over 1 million American workers with over 100 companies are set to receive a bonus, pay hike or retirement increase as a direct result of President Trump’s tax reform package.

The latest list from Americans for Tax Reform, which has been collecting the names of firms paying the Trump bonus, finds that some are paying as much as $3,000.

One company, IAT Insurance of Raleigh, N.C., wrote Secrets today asking to be added. “I just read your story on the 100 companies giving bonuses after tax reform. On December 11, IAT Insurance Group announced their pledge to reinvest tax savings into what makes IAT great, their employees. After the bill officially passed, IAT announced on December 21 their plan to pay all non-executive employees a $3,000 bonus on January 15, 2018,” said the company.

“Just read your story. Can you include us in your tax cut list?” added Lisa Mattson, the director of marketing and communications for the popular Jordan Vineyard & Winery of Healdsburg, Calif.

“We are very appreciative of all AAON employees and want to commemorate the passing of this historic, economy-stimulating tax reform law. While most employees are shareholders of the company and benefit as a result of the new tax law, we felt it appropriate to provide a more direct recognition of their importance to AAON’s future success.” — CEO Norman H. Asbjornson

“Congress, working closely with the President, took a monumental step to bring taxes paid by U.S. businesses in line with the rest of the industrialized world. Tax reform will drive economic growth and create good-paying jobs. In fact, we will increase our U.S. investment and pay a special bonus to our U.S. employees.” – Chairman and CEO Randall Stephenson

“The bonuses are possible due to the company's robust financial performance in 2017 and strong confidence in the growing U.S. and global economy now that the Tax Bill has passed.” – AccuWeather press release

"We are pleased that these tax reforms provide Aflac with an opportunity to increase our investments in initiatives that reflect our company values; providing for our employees in the long and short term, ensuring future growth for our company and giving back to the community." — Aflac Chairman and CEO Dan Amos

“Recent tax reform has received much publicity. While the company does not yet pay cash taxes due to our enormous losses in the past, there is no doubt that our country’s new tax structure will have positive long-term benefits for American. We will be able to invest even more in aircraft and facilities, and we will be able to do so with even greater confidence about the future. As we analyze those potential future benefits, our leadership team, backed by our Board of Directors, considered how a portion of that positive impact might be directly shared with the very people who produce the profits at American—all of you.

We are pleased to announce that in light of this new tax structure and in recognition of our outstanding team members, American will distribute $1,000 to each team member (excluding Officers) at our mainline and wholly owned regional carriers. These distributions will total approximately $130 million and will be made in the first quarter of 2018.” – American Airlines press release

“President and CEO Mark W. Jaindl stated, “Beginning in 2018, we expect to see benefits from the recent tax reform due to lower corporate tax rates. As we celebrate the holiday season and prepare to close out another year of growth at American Bank, the Board of Directors and senior management want to give back to our team members who are directly responsible for our success.”

Mr. Jaindl continued, “We expect the actions taken by Congress and the President will have a material positive impact on growth throughout the country. As a result, we anticipate our hiring efforts will increase in 2018.” – American Bank press release

The full list is available on Bedard’s post. Now, it’s a waiting game. Who made the blunder? The Republicans for pushing a tax bill that’s currently unpopular, or the Democrats for voting against a middle class tax cut. Oh yeah, I forgot to mention that; this bill cuts taxes for 80 percent of Americans. This tax bill will probably get more popular as well. As Democrats are eating crow over the impact of this bill on American workers, it could spoil their 2018 plans when millions of families find out they got significant relief with this reform package.