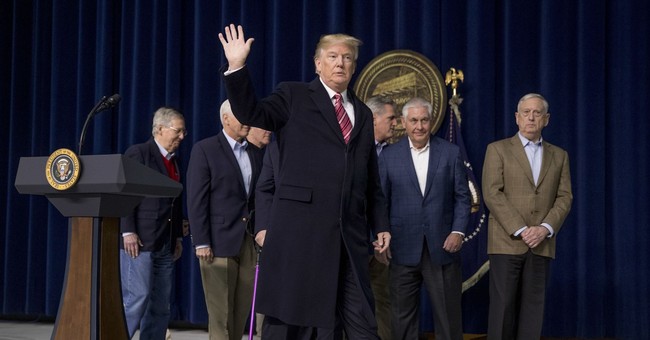 Well, the Russia probe headed by Special Counsel Robert Mueller has finally reached the Oval Office. The Department of Justice investigation headed by Special Counsel Robert Mueller into whether the Trump campaign colluded with the Russians to tilt the 2016 election has mulled interviewing the president since December. Trump is reportedly willing to sit down and answer questions to finally kill this narrative for good, an allegation that has thus far produced zero evidence to suggest the president’s campaign official within the president’s orbit colluded with the Kremlin. Still, The Washington Post reported that the president’s lawyers don’t want an open-ended sit down just yet until some parameters have been established:

Special counsel Robert S. Mueller III has raised the likelihood with President Trump’s legal team that his office will seek an interview with the president, triggering a discussion among his attorneys about how to avoid a sit-down encounter or set limits on such a session, according to two people familiar with the talks.

Mueller brought up the issue of interviewing Trump during a late December meeting with the president’s lawyers, John Dowd and Jay Sekulow. Mueller deputy James Quarles, who oversees the White House portion of the special counsel investigation, also attended.

The special counsel’s team could interview Trump very soon on some limited portion of questions — possibly within the next several weeks, according to a person close to the president who was granted anonymity to describe internal conversations.

“This is moving faster than anyone really realizes,” the person said, who said Trump is comfortable participating in an interview and believes it would put to rest questions about whether his campaign coordinated with Russia in the 2016 election.

However, the president’s attorneys are reluctant to allow him to sit down for open-ended, face-to-face questioning without clear parameters, according to two people familiar with the discussions.

NBC News reported on this development earlier this morning. In their story, they touched upon how Trump has dismissed the investigation, adding that the intelligence community “has been definitive that Russia attacked the integrity of the 2016 election,” despite former Director of National Intelligence James Clapper saying it was just three of the 17 agencies that makeup our intelligence apparatus. Now, that’s not to say that there is evidence of such activity. It’s just simply not true that the entire IC signed off on this, but it helps push the narrative forward.

We’ll see what comes of this, but what is clear, and some reporters are picking up on this (finally), is that this whole Russia investigation is a politically-motivated clown show that’s devolving rapidly. Folks, even late night host Conan O’Brien is starting to weigh in on Russia, and he thinks it’ll get Trump re-elected. Whether this is a joke or not doesn’t matter. When something like this becomes a punch line for the comedians, you know the shelf life on this whole show is rapidly coming due.

It's starting to look like the Russia investigation will finally bring Trump down. And by bring down, I mean get him reelected.