ICYMI: Trump's Disapproval Hits 60 Percent In Iowa, But Is It A Red Flag? 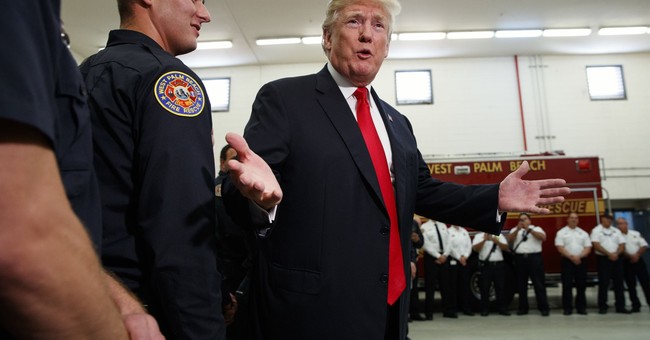 Is there a red flag with this Des Moines Register poll? Before Christmas and the signing of the most extensive tax reform in thirty years that gave 80-90 percent of American families relief, the poll showed that 60 percent of Iowans disapproved of Donald Trump’s job performance. The heart of Trump country seemed to be turning against him, but we’ll have to reassess since this tax bill passed. The result of this legislation allowed the GOP and the Trump White House to end this year on a high note. One of their cornerstones is now law. Yet, another thing to account for in this poll is that voters are exhausted of politics. In some ways, the 2016 election has never ended, especially when it comes to the Trump administration’s daily war with the news media, which has stepped on multiple rakes covering this White House. It’s also an off year election-wise, though Democrats also ended this cycle with some serious wins, albeit the most significant ones from states that Hillary Clinton won in 2016 (via Des Moines Register):

Sixty percent of respondents to this month’s Des Moines Register/Mediacom Iowa Poll say the United States has gotten off on the wrong track, and 60 percent likewise disapprove of the job Trump, a Republican, is doing as president.

Ford, a 49-year-old political independent, lamented the “general craziness” of the country’s political arena and the “unprofessionalism” he sees in the White House.

The Iowa Poll, conducted by Selzer and Co. of Des Moines, questioned 802 Iowa adults Dec. 3-6 and has a margin of error of plus or minus 3.5 percentage points.

Trump is unpopular across a wide range of demographic groups in the state.

Sixty-nine percent of women, 68 percent of Iowans making less than $50,000 a year, 67 percent of city-dwellers and 62 percent of independents disapprove of his performance.

“He’s not really a leader,” said Diana Fern, 56, a homebirth midwife from Fairfield. “Because he doesn’t have experience, he’s not really leading. I feel like he’s reacting to situations, and he hasn’t really stated a clear vision. And I think his integrity is in question.”

Fern described herself as a political independent, but said she favors female candidates and more often votes Democratic than Republican.

Across all the demographics recorded in the poll, just two show a majority approving of Trump: Republicans, at 78 percent, and evangelical Christians, at 51 percent.

After a wild 2017 that saw Trump take office, bruising congressional fights over health care and taxes, an ongoing investigation into Russian election meddling and, in recent weeks, rising attention on sexual harassment, a strong majority of Iowans say they’re increasingly repelled by politics.

Is it a bit eye opening that the heart of Trump country is not pleased with his performance? Yes and no. Frankly, if people are trying to stretch this into 2020 or even 2018 commentaries, let’s hold off. Both are eons away, especially the latter contest. The Democrats do not have a deep 2020 bench, mostly dotted with neophytes (concerning national campaigns), lightweights, and senior citizens. Yet, never put it pass this party to try and resurrect Hillary Clinton or nominate someone as left wing as Bernie Sanders. Clinton has sworn off running for office again, but you never know with that power couple. For now, let’s count the Clintons out and a left wing loon in for 2020. The ideas may resonate with the young voter bloc of the old Obama coalition, but once you find out that employee-based health insurance plans are cannibalized with a Medicare-for-all system, support drops like a rock.

Second, we’ll have to reassess this poll when the impact of the new tax bill is fully recognized. A lot of Democratic spin went into trashing this bill, which is a middle class tax cut. Already scores of companies have issued bonuses to workers, signaled they will increase employee investment, and boost philanthropic donations. In Las Vegas, a new resort got its green light when developers knew the tax bill would pass. It created 11,000 new jobs. They’re banking on it creating an even better economic climate. The GOP needs to fund a massive effort to rip apart the Democratic nonsense on this bill and the direction of the country. It’s time to get out of the trenches.

The economy is growing at a solid four percent. Consumer confidence is at a 17-year high. Unemployment is down at a near two-decade low. This is not economic torpor we’re talking about here. It’s a booming economy. Over a quarter of a million jobs were created last month. I wonder how many Americans know we’re growing at four percent; probably not many given what news networks focus on with this White House. So, while 60 percent is not a number to dismiss—and the Trump folks should take this into account, I think it’s just way too early to discern anything from this survey. What it does show is what happens when there is a lack of legislative accomplishment and sluggishness when it comes to enacting an agenda. The Trump White House has been rocky on that front, especially on health care. But this tax bill deserves high marks and hopefully they can master the messaging of the economic dividends that are happening as a result. The Democratic talking points began to crumble as soon as the bill was heading to President Trump for his signature. It’s time to get aggressive and flip the narrative. The Democratic Party just voted against the middle class because they want to screw over Trump. They put party first. They want the country to fail and then list the positive economic indicators again. Go on the attack. Let the policy results trickle in and then we can reassess.