Gloria Steinem: Trump Is Not The President Because 'He Lost By 10 Million Votes' 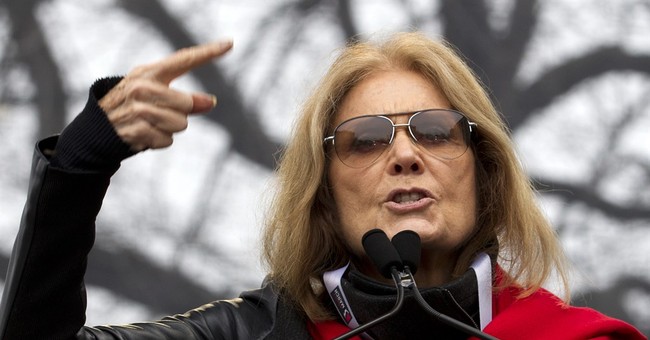 Yeah, not to get your blood pressures to spike over the weekend, but some on the feminist Left just need to accept that 2016 happened and they lost. It doesn’t matter that Hillary Clinton got more popular votes either; that’s not how you win the presidency. We all know this. Now, as we enter the 2018 midterm season, we still have some who just can’t stand that Trump won, that he’s president, and that Hillary Clinton will never be president—ever. Enter Gloria Steinem who says she doesn’t think Trump is president because he lost by 10 million votes. No, he didn’t (via New England Cable News):

Hundreds of women and men came to the opening night of the Massachusetts Conference for Women to hear Gloria Steinem speak.

The feminist icon told the crowd Wednesday that sexual harassment is about power, not sex, and she said women are gaining their voices in a way that's never happened before.

The 83-year-old didn't not mince words on power and politics. On the national conversation about sexual misconduct, she pointed to the top.

"He's not the president," Steinem said of Donald Trump. "He lost by 10 million votes. I never called him president once, he's the harasser-in-chief and part of the reason, at this point, people are so frustrated."

Again, that’s not how we decide the president, Ms. Steinem. Trump had a decisive 304-227 Electoral College victory over Hillary. That’s why he’s president. The willful ignorance of ignoring this aspect of the Constitution just shows you how liberals just make up the rules and move the goal posts when things don’t go their way. It’s their hallmark characteristic. Also, by “people,” you mean liberals right, Gloria?

Yet, it’s par for the course for Steinem and her ilk. Our gal couldn’t hack it, so no one really won or something. Indeed, I can understand the anger; this was one of the most winnable elections for Democrats, who blew it when they nominated Lady Macbeth to be their standard bearer. The Left shouldn’t be angry at Trump for winning, they should be more infuriated with Hillary for losing. She could have won this election if she had an economic agenda and political skill. She had neither. Some things can’t be fixed, but there certainly were other areas that she could have improved on to better her chances, like campaigning aggressively in the Rust Belt.