Hollywood Actress: Hillary Is Dangerous, We Would Be At War Right Now If She'd Won 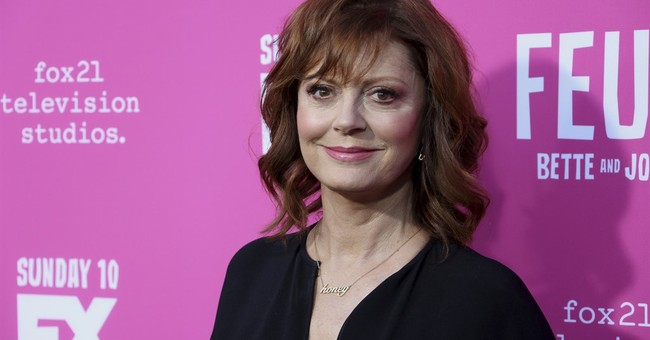 At times, you find people who are with you (kind of) in politics. In 2016, Susan Sarandon, one of Hollywood’s Left wing stalwarts, angered many with her refusal to support the candidacy of Hillary Rodham Clinton. Yes, liberals, women voters are not monolithic. They will sit on the sidelines if their standard-bearer sucks—and they’re smart enough to know a charlatan. Sarandon sat down with The Guardian to discuss politics and her role as Bette Davis in the upcoming series Feud, which details the titanic battle between Davis and fellow actress Joan Crawford. She also detailed her participation in the feminist movement, where she noted that some ladies lobbying for the Equal Right Amendment embodied the shrill persona that’s often associated with the group. She told the publication an anecdote about being in an elevator filled with angry feminists and quietly telling them that the way they were going about pushing the ERA isn’t how things work. She also doesn’t care about not falling in line with the rest of her liberal colleagues. She’s convinced that Hillary Clinton is dangerous, and that we would probably be at war if she were in the Oval Office. She decided to cast her lot with Jill Stein [emphasis mine]:

Does she have any sympathy with the critique that casting a protest vote is the luxury of those insulated from the effects of a Trump presidency? “It wasn’t a protest vote. Following Bernie wasn’t a protest.” Voting for Jill Stein was, by any definition, a protest vote. “Well, I knew that New York was going to go [for Hillary]. It was probably the easiest place to vote for Stein. Bringing attention to working-class issues is not a luxury. People are really hurting; that’s how this guy got in. What we should be discussing is not the election, but how we got to the point where Trump was the answer.” (We should also, she says, inching towards the space where the extreme right meets the left, be discussing how “you can’t judge by the mainstream media what’s going on in the country. How did we lose all our journalists and media?”)

Has she lost friends over all this? “No. My friends have a right to their opinions. It’s disappointing but that’s their business. It’s like in the lead-up to Vietnam, and then later they say: ‘You were right.’ Or strangely, some of my gay friends were like: ‘Oh, I just feel bad for [Clinton]. And I said: ‘She’s not authentic. She’s been terrible to gay people for the longest time. She’s an opportunist.’ And then I’m like: ‘OK, let’s not talk about it any more.’”

Still, I think while there was vast political error on both sides, the inability of Sarandon and her ilk to embrace the lesser of two evils permitted the greater of the two evils to rise. And yet I like Sarandon. It takes real courage to go against the mob. Her inconsistencies are a little wild, but in the age of social-media enforced conformity, I have never met anyone so uninterested in toeing the line.

Did she really say that Hillary was more dangerous than Trump?

“Not exactly, but I don’t mind that quote,” she says. “I did think she was very, very dangerous. We would still be fracking, we would be at war [if she was president]. It wouldn’t be much smoother. Look what happened under Obama that we didn’t notice.”

It seems absurd to argue that healthcare, childcare, taxation for the non-rich wouldn’t be better now under President Clinton, and that’s before we get to the threat of deportation hanging over millions of immigrants. “She would’ve done it the way Obama did it,” says Sarandon, “which was sneakily. He deported more people than have been deported now. How he got the Nobel peace prize I don’t know. I think it was very important to have a black family in the White House and I think some of the stuff he did was good. He tried really hard about healthcare. But he didn’t go all the way because of big pharma.”

A lot of Republicans voted for Trump because they viewed him as the lesser of two evils. For Sarandon, it was the same mindset, though she decided to vote for Stein. She couldn’t vote for Hillary. It’s not just Republicans and conservatives who dislike the former first lady. The Susan Sarandons and Bernie Sanders disciples of the world despise her as well. On this, we can agree.