MSNBC Reporter: Rand Paul Being Beaten Up Is 'One Of My Favorite Stories' 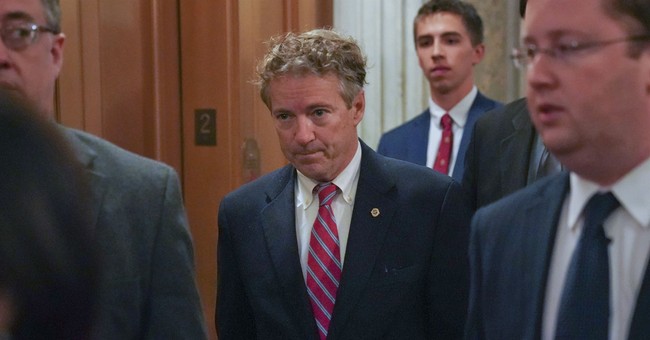 UPDATE: Kasie Hunt has tweeted an apology to Sen. Paul.

There's nothing funny about 6 broken ribs -- my apologies to @RandPauI for suggesting on air earlier today there was. Hope your recovery is on the right track, senator, looking forward to seeing you in the hallways soon.

Well, this was a rather awkward moment. NBC reporter Kasie Hunt described the assault on Sen. Rand Paul (R-KY) as “one of her favorite stories.” Of course, this isn’t the best phrase to describe this incident, with Hunt trying to correct herself on air but opting to continue with her report. She concluded that Paul’s assault by neighbor, Rene Boucher, was caused by a landscaping dispute, declaring that as the reason for the attack. This was not a simple push and shove. Paul was severely injured, with six broken ribs (via Politico):

Sen. Rand Paul (R-Ky.) said Wednesday he had sustained six broken ribs and a build-up of fluids between his chest and lungs as a result of an altercation with a neighbor last Friday, revealing additional maladies about the previously reported incident.

"I appreciate all of the support from everyone. A medical update: final report indicates six broken ribs & new X-ray shows a pleural effusion," Paul tweeted. The pleural effusion, which was previously undisclosed, results in a buildup of fluids around the lungs.

A top adviser for the senator had previously announced Paul had only sustained five broken ribs, including "three displaced fractures."

Boucher is expected to face federal charges over the assault. Yet, there have been multiple reports disputing the landscaping claim. Still, and yes, we’re still playing this game, if a Democrat got the crap kicked out of him (or her) over grass clippings, “favorite story” probably wouldn’t be the descriptor—though we would have a lot of interesting takes about how all of this was somehow Trump’s fault. Oh wait:

Look no further than 'Rand Paul was asking for it' to see why these outlets are absolutely despised pic.twitter.com/SmR6ZIY6cK