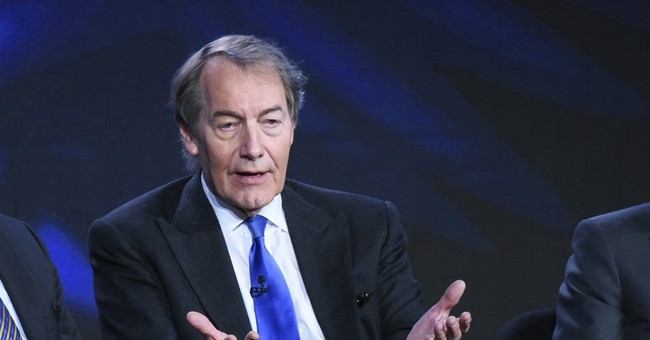 UPDATE: Mr. Rose has been suspended from CBS, Bloomberg, and PBS pending an investigation.

CBS suspends Charlie Rose. Statement: "Charlie Rose is suspended immediately while we look into this matter.”

PBS is suspending its broadcast of Charlie Rose: "PBS was shocked to learn today of these deeply disturbing allegations. We are immediately suspending distribution of 'Charlie Rose.'"

And here's Bloomberg (which also broadcasts "Charlie Rose"): "We are deeply disturbed to learn of these allegations and are immediately suspending the show from airing on Bloomberg TV."

Flashback to two weeks ago when Charlie Rose was talking about the importance of covering stories about harassmenthttps://t.co/wfPHtG9JNN pic.twitter.com/SeJp1HLd2Z

Well, the butcher’s bill for sexual misconduct just added another name: Charlie Rose. Eight women have accused Rose, who serves as a co-host for CBS This Morning and acts as a contributing reporter for 60 Minutes, of sexual misconduct. They all worked or had applied to work on his PBS show, Charlie Rose. The Washington Post had a lengthy article on the subject. Most of the women refused to go on-the-record out of fear of retribution, though they allege that Mr. Rose had a “volatile temper,” with some saying they were subjected to lewd phone calls and inappropriate touching of their breasts and genital regions. In a statement to the Post, Rose offered a rather vague statement, where he apologized for some aspects of his past behavior, though he never explicitly cited which actions he was showing contrition for [emphasis mine]:

The women were employees or aspired to work for Rose at the “Charlie Rose” show from the late 1990s to as recently as 2011. They ranged in age from 21 to 37 at the time of the alleged encounters. Rose, 75, whose show airs on PBS, also co-hosts “CBS This Morning” and is a contributing correspondent for “60 Minutes.”

There are striking commonalities in the accounts of the women, each of whom described their interactions with Rose in multiple interviews with The Post. For all of the women, reporters interviewed friends, colleagues or family members who said the women had confided in them about aspects of the incidents. Three of the eight spoke on the record.

Five of the women spoke on the condition of anonymity out of fear of Rose’s stature in the industry, his power over their careers or what they described as his volatile temper.

“In my 45 years in journalism, I have prided myself on being an advocate for the careers of the women with whom I have worked,” Rose said in a statement provided to The Post. “Nevertheless, in the past few days, claims have been made about my behavior toward some former female colleagues.

“It is essential that these women know I hear them and that I deeply apologize for my inappropriate behavior. I am greatly embarrassed. I have behaved insensitively at times, and I accept responsibility for that, though I do not believe that all of these allegations are accurate. I always felt that I was pursuing shared feelings, even though I now realize I was mistaken.

“I have learned a great deal as a result of these events, and I hope others will too. All of us, including me, are coming to a newer and deeper recognition of the pain caused by conduct in the past, and have come to a profound new respect for women and their lives.”

Most of the women said Rose alternated between fury and flattery in his interactions with them. Five described Rose putting his hand on their legs, sometimes their upper thigh, in what they perceived as a test to gauge their reactions. Two said that while they were working for Rose at his residences or were traveling with him on business, he emerged from the shower and walked naked in front of them. One said he groped her buttocks at a staff party.

Take what you will from that, but it seems that he’s admitting to some of the inappropriate behavior. We’ll probably find out in due time what that is, but even one incident is bad enough. This isn’t about the cumulative effect here.

Editor's Note: Post has been updated to clarify some of the accusers' allegations against Mr. Rose. Not every woman accused him of committing all three acts of harassment against them. The initial lede gave that impression and has been corrected. Our apologies.