Dan Rather On Clinton Rape Allegations: Even If They Turn Out To Be True, It Was A Long Time Ago 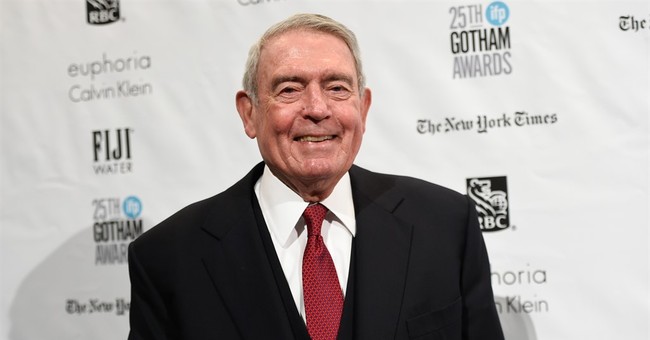 We’re not excusing what Roy Moore is accused of—it’s ghastly. The man is accused of being inappropriate with multiple women; with another, a Trump voter, claiming he sexually assaulted her when she was 16 years old. The Republican Party had abandoned Moore; the optics of this is just too terrible to maintain support. It gets worse; Guy wrote today about how this man was banned from a Gadsden mall because he was trolling for high school dates and badgering teenage girls in the process (UPDATE: former Gadsden Mall manager denies there was a ban, though one of Moore's accusers says he was barred). All of the accusers were teenagers at the time. Yet, one thing the Media Research Center observed was the coverage. Societies mature and change, and yes, maybe it’s a good thing that when a woman comes forward with her story about sexual assault, they’re not attacked. That was not the case when Bill Clinton had sexual assault allegations hurled in his direction. And the media mostly fell silent in reporting the allegations.  Tim Graham of Newsbusters even found an old 1999 clip from Don Imus’ then-radio show, in which Dan Rather, pre-Killian Documents, said that even if the Juanita Broaddrick allegations are true, it was a long time ago, and that we should move on:

DON IMUS: Even this Juanita Broaddrick thing that, this interview that the people over there at NBC News have been sittin' on for some reason, who knows but --

DAN RATHER: Well, I think the reason is pretty obvious that they're, they don't call me and tell me why they run or don't run these things, but I think it's pretty obvious. They are nervous about, number one, whether this information is accurate, whether it's really true or not. And then number two, even if it does it turns out to be true, it happened a long time ago and number three, they've gotta be figuring maybe, just maybe the American public has heard all they want to hear about this and are saying you know, "Next. Let's move on to the next thing."

IMUS: I was reading in either Time or Newsweek that even the woman herself, Juanita Broaddrick said that she hopes that this thing went away this week and even she was sick about hearing about it and it's her story."

RATHER: Well, let's hope she gets her way with that.

Graham also added that 80 minutes of coverage has been devoted to Roy Moore, whereas the Clinton accusers only got four stories about Bill’s alleged sexual misconduct over a 12-month period.

Newsweek had no story, just a brief mention up front in their "Conventional Wisdom Watch" box. It didn't even mention Broaddrick's name, just "Jane Doe #5," which was how she was referred to documents of House investigators. Newsweek quipped: "Should have leveled (unproven) assault charge in '78 or '92. But sounds like our guy."

In that same week's editions Time and Newsweek both published gushy nine-page cover stories on guess what? Hillary Clinton and her campaign for the Senate. Or as Newsweek put it, Hillary was "the hottest commodity in American public life."

Rich Noyes reported today that the Moore allegations have drawn almost 80 minutes of coverage on the Big Three networks over the last four days. When then-President Bill Clinton was accused of rape, those same newscasts aired just four stories mentioning those charges during a 12-month period from March 1998 through March 1999.

There’s a reason why the notion of a Democrat-media complex, or of feminists being the shock troops for the Left, exist. It’s because these incidents point to that. Bill Clinton was a presidential candidate at the time, a governor, and someone who was elected twice as president. He only got four stories over a year’s worth of coverage by CBS, ABC, and NBC, when he was accused of rape. Again, the allegations against Moore are despicable, but the media’s treatment is entirely different based on party affiliation. Yes, par for the course. We all know this, but it never hurts to be reminded constantly of it.