Hold On: Fox News Reporter Cites The Missed Nuance In Trump's Remarks About Putin And 2016 Election 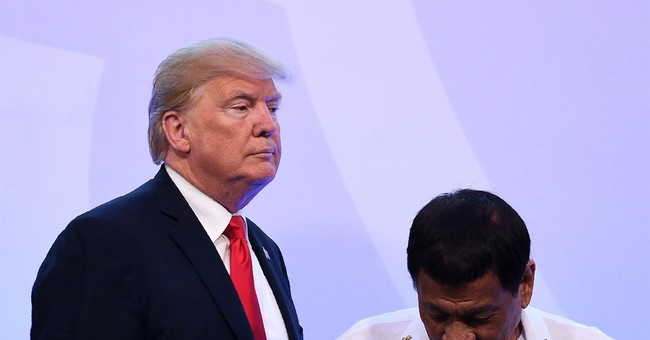 So, Donald Trump briefly spoke with Russian President Vladimir Putin at the Asia-Pacific Economic Cooperation in Da Nang, Vietnam. He spoke about it with the White House Press Corps onboard Air Force One on the way to Hanoi. Of course, questions about Russian meddling:

REPORTER: Did Russia’s attempts to meddle in U.S. elections come up in the conversation?

REPORTER: Do you believe him?

TRUMP: Well, look, I can’t stand there and argue with him. I’d rather have him get out of Syria, to be honest with you. I’d rather have him — you know, work with him on the Ukraine than standing and arguing about whether or not — because that whole thing was set up by the Democrats.

But Putin said he did not do what they said he did. And, you know, there are those that say, if he did do it, he wouldn’t have gotten caught, all right? Which is a very interesting statement. But we have a — you know, we have a good feeling toward getting things done.

And, you know, you’re talking about millions and millions of lives. This isn’t baby stuff. This is the real deal. And if Russia helped us, in addition to China, that problem would go away a lot faster.

REPORTER: How did you bring up the issue of election meddling? Did you ask him a question?

Don’t forget, all he said is he never did that, he didn’t do that. I think he’s very insulted by it, which is not a good thing for our country. Because again, if we had a relationship with Russia, North Korea — which is our single biggest problem right now — North Korea, it would be helped a lot.

IMPORTANT NUANCE in @realDonaldTrump statement on Putin denying meddling in US election. @POTUS did NOT say he "believes" Putin. He said he believes Putin "means it" when he says it.

It saddens me that accuracy in reporting is met with scorn in the United States. Add to that the irony that I am currently in a communist nation.

In this case, @johnrobertsFox is right. I said it earlier today: https://t.co/yzV1w5iHch
I've been a harsh #TrumpRussia critic, but accuracy matters no matter which side you're on and Trump's words have been misreported. https://t.co/snLUFKrbIX

This WP headline is not correct. Trump said “I really believe that when he tells me that, he means it." That's a claim of sincerity, not truth.

Yes, Trump is a liar. But let's hold ourselves to a higher standard. pic.twitter.com/2eAsDx6mC6

Roberts is right about this, and everyone mocking him is wrong. Getting quotes right is basic journalism. If we fudge what they mean, why should anyone trust us? https://t.co/nf7xMi39Qn

BREAKING: Trump says he believes in U.S. intelligence agencies despite past skepticism, says they're 'led by fine people.'

This was taken as Trump believing Putin that Russia didn’t interfere in the election. That is not what he said—and people wonder why the media isn’t trusted. Fox News John Roberts noted the nuance, saying that Trump said he believes Putin means what he says about the meddling, not that he—Trump— believes Putin and his denials. Slate’s William Saletan and Verrti’s Peter Daou  (yes, that Peter Daou) admitted that the media coverage was misreporting what Trump actually said. Also, it was three of the seventeen intelligence agencies that signed off on that assessment of the 2016 election. Not commenting on the conclusions of that report because yes, I think it’s quite clear that Russia did interfere, though it was not as effective, or as Manchurian Candidate-level, as the Democrats and the news media make it out to be. Even then-Director of National Intelligence James Clapper said that to say the intelligence community signed off on this is not accurate. Trump later clarified his remarks. Granted, I don’t necessarily agree that this Russia collusion story is a “Democratic-inspired thing,” though I think it’s outrageously overblown, and that there’s no evidence of collusion. Regardless, the media stepped on a rake on this one, with even Clinton’s most loyal supporter agreeing as such.