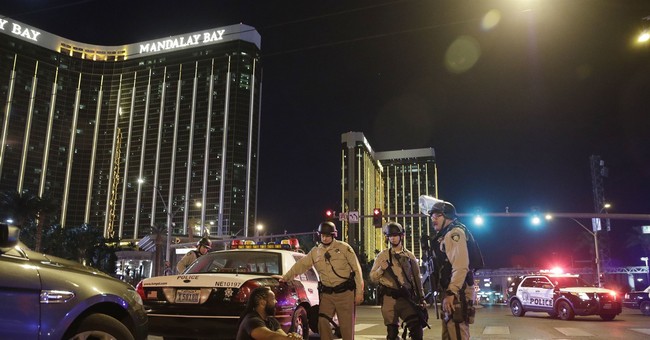 Leah wrote about Democratic Rep. Henry Cuellar (D-TX) admitting that gun control laws don't work, which is a tacit admission that nothing would have stopped Stephen Paddock from killing 59 people and wounding another 527 in Las Vegas on October 1. Now, on the Republican side, Sen. Tom Cotton (R-AR) also said on Hugh Hewitt this morning that there is not a single policy that Democrats have offered that would have stopped an event like this. Here’s a partial transcript [emphasis mine]:

Hugh Hewitt: I’d also like to ask you, I’ve heard a lot of debate, as it always the case, it’s an emotional release for some people to talk about gun control. But of all of the proposals you have heard or seen on the Senate floor or discussed in the media, would any of them have stopped this monster from doing this hideous act?

Sen. Tom Cotton: Hugh, again, it’s preliminary, we don’t know all the facts, but from what I have read in the news, it doesn’t seem like any of the proposals floated in the last 24 hours would have stopped this killer. You know, when I hear those videos, it sounds to me like machine gun fire, a belt-fed machine gun, which is exceptionally hard to acquire in the United States, certainly linked ammunition as well. But we don’t know that for sure. I don’t think we have confirmation, yet, of the kinds of weapons that were used, and where he obtained them, and under the circumstances that he obtained them. So I think we have to gather all those facts before we make any conclusions.

TC: Well, it’s hard to imagine the circumstance in which machine gun like a M-249 Squad Automatic Weapon or M-240 Bravo could ever get off a military base. You know, they’re kept under multiple locks in an arms room. They’re inventoried regularly. It’s not something that you just find at Wal-Mart or a local pawn shop or anything else. Machine guns have been very strictly regulated in this country for 80 years. They’ve been nearly prohibited for 30 years. There is a small market for them, but again, it’s, to obtain one is even more extensive background checks and government reviews than to obtain your typical rifle or pistol. So I think again, we have to, I’m not saying, Hugh, that I know that it was a belt-fed machine gun. I’m saying that it sounded as if it was one. And that’s why we have to gather all the facts patiently before we make any conclusions.

It doesn’t appear that any belt-fed automatics were recovered, though police have recovered at least 23 firearms at the Mandalay Bay hotel suite Paddock paid for to stage his attack. Another 19 were recovered from his home in Mesquite, Nevada (via WSJ):

Investigators found 23 firearms in a room on the 32nd floor of the Mandalay Bay Resort and Casino. The weapons included AR-15-style and AK-47-style rifles as well as a large cache of ammunition, two law-enforcement officials said.

At least one of the guns was outfitted with a “bump stock,” a device that allows the weapon to increase the rate of fire on a semiautomatic rifle, one of the officials said.

The gunman alternated between two windows in the hotel room, firingupon thousands of concertgoers below, one official said. The staccato of automatic gunfire could be heard in videos of the shooting that were posted online.

Clark County Sheriff Joseph Lombardo said they also found Tannerite, an explosive that detonates when shot by bullets and is used in target practice.

In Paddock’s car, authorities found more ammunition and ammonium nitrate, a fertilizer that can be used to make explosives, Mr. Lombardo said.

The question is whether any of these purchases were illegal. Given what we know from past mass shootings, the perpetrator usually bought their firearms legally and had no prior run-ins with law enforcement. That appears to be the case here, but like Sen. Cotton said there are still questions over this tragic incident. Yet, as the Democrats clamor for more gun control policy, mostly through background checks, everyone knows this is not an effective policy. Everyone knows it won’t stop future mass shootings. It’s bad policy. Passing laws to make it look like your doing something is just wasting time. Homicide rates are down. Crime is at record lows. And we have enough gun laws on the books. At this point, Democrats seek to use government to regulate the innermost reaches of human nature. That’s impossible and utterly absurd.