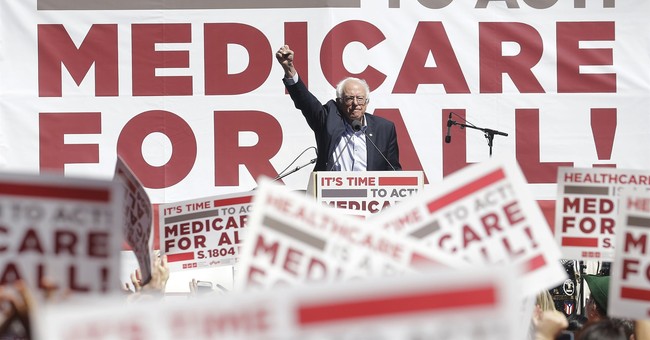 Democrats may be wondering whether this dabbling with single-payer health care was a good idea. Sen. Bernie Sanders (I-VT) has been pushing his Medicare-for-All legislation that has garnered 15 co-sponsors. It’s the left’s dream, which includes a conservative price tag of $32 trillion. It’s not going anywhere. Sanders even had a Canadian doctor fly in to bolster his single-payer push. Yet, she admitted that Canada, like the United Kingdom, has long wait times. Canada and UK also face the similar problems regarding general practitioners. At least one million people in both countries can’t find one. While the Democrats got a boost from the news that Sen. John McCain (R-AZ) is breaking once again with fellow Republicans on the Graham-Cassidy health care bill, Sen. Rand Paul (R-KY) is already a no and Susan Collins will probably oppose as well, it still presents a narrative that Democrats don’t like. Because while this bill is getting kicked in the teeth in media circles, the polling on single-payer is not stellar, especially when you add in the part where Americans’ private insurance plans will be gutted by Sanders’ bill. It has some Democrats wondering if their party jumped the gun (via Politico):

Sen. Tom Carper (D-Del.) acknowledged that “maybe” the single-payer rollout had been premature, recalling a Methodist minister who once advised him as governor that “the main thing is to keep the main thing the main thing.”

“In this case the main thing is stabilizing the [Obamacare] exchanges, so people in every state, every county, can have better health insurance at a better cost,” said Carper, who has not signed on to Sanders’ bill. “That’s what we should be about right now.”

Sanders' single-payer plan drew support from no fewer than five fellow potential challengers to Trump in 2020. Liberal activists crowed that any Democrat who wants the party's next presidential nod would have to support a path to universal health care.

Sens. Bill Cassidy (R-La.) and Lindsey Graham (R-S.C.) were crafting their latest version of a repeal measure “even as Bernie was working on his press conference” on single payer, Durbin added, "so it’s been around a while.”

Though no Democratic senator faulted single payer’s supporters, some in the party lamented the choice to unveil single payer before the GOP reached its deadline to repeal Obamacare with a simple majority vote. Trump and Senate Majority Leader Mitch McConnell (R-Ky.) are working hard to lock down Republican support for repeal, and they're close. A climactic vote could come next week, as the clock runs out on any hope of getting rid of Obamacare.

“Doing it when he did it was a gift to the repealers,” one Democratic strategist said of Sanders’ single-payer push. “It took focus off them and put it on us at an unhelpful time.”

I'm not sure single payer vs Graham-Cassidy is the debate we want right now. https://t.co/toBHvusHug

(It took 30 seconds for a Dem aide to text, worrying: "Republicans get to frame it as single payer vs their alternative in prime time.")

A Democrat weighs in: "The only way Graham and Cassidy can pass their bill is a distraction. Bernie is serving one up on a silver platter." https://t.co/uYsAzyY1Y1

Certainly, most Democrats probably want to work on improving the existing Obamacare system, which is politically impossible for Republicans, who campaigned for nearly ten years on this law’s repeal. Even Sanders slammed the Affordable Care Act as not going far enough in an interview with the left wing Nation magazine last week. Maybe that’s because the far left sees the ACA as the stepping stone to single-payer:

People are saying, OK, we made some progress. Twenty million more people have health insurance, that’s important; in states like Kentucky and West Virginia, the number of uninsured plummeted, that is a good thing. But has health-care reform gone anywhere near far enough? The answer is that it has not.

We’ll see how things go on from here, but the progressive train peddling this astronomically expensive public policy initiative will keep going. It’s been floated as a litmus test by the far left of the Democratic Party. Still, I think a lot of more centrist Democrats and operatives are noting the polling on single-payer, which collapses once people find out more about it:

Finally from the poll: The public is divided over a single-payer health care system, with 47 percent favoring such an approach and 46 percent opposing it.

But when supporters are told that all health care costs would be covered under a single-payer system — but that it would eliminate employer plans and that there would be only one government plan — the numbers move to 36 percent favor, 55 percent oppose.

Sens. Lindsey Graham (R-SC) and Bill Cassidy (R-LA) are set to debate Sens. Amy Klobuchar (D-MN) and Bernie Sanders on Monday. Sanders has admitted in previous remarks that expanding Medicaid to everyone, the government-run health care program for the working poor, would bankrupt the country. He also evaded NBC's Chuck Todd's inquiries about his current health care bill's cost.