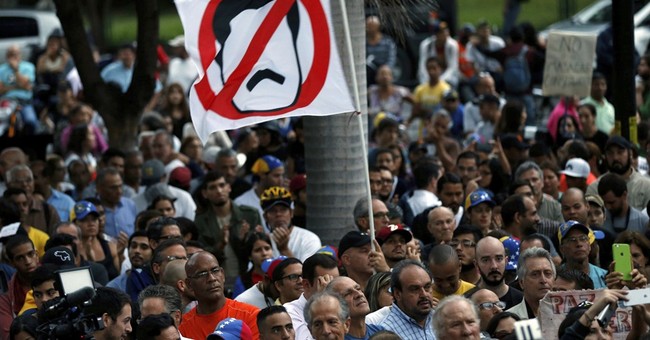 So, we all know that Venezuela, once a beacon for so-called 21st Century Socialism, is pretty much a hellhole. The people are starving and eating out of garbage cans; some are even eating dogs and cats. Zoo animals aren’t safe from the starving masses. Medical supplies in hospitals are so low that basic items, like soap and gloves, are lacking. There’s even a food police unit to crack down on black market sales. Oh, and there’s no toilet paper.

On the political front, we had the Venezuela’s Supreme Court acting weird concerning separation of powers, with a brief scare that the judicial body would assimilate the duties of the legislature, which is firmly anti-Chavista. That turned out to be a false alarm, but it doesn’t mean the government hasn’t stopped killing protesters. Protests against the presidency of Nicolas Maduro, the successor to the late Hugo Chavez, have been pervasive from the opposition.

Recently, their activities have now been rendered moot by a vote that created a new legislative body on Sunday. Eight million Venezuelans voted to in effect give Maduro unlimited power (via NYT):

Just a year and a half ago, Venezuela’s opposition was riding high, at the apex of its power.

It had taken control of the National Assembly after years of having been outflanked by Venezuela’s left. It was planning new laws, the release of its political prisoners and overhauls intended to pull Venezuela out of a deep economic crisis. Its eye was on the presidency in 2018.

But with one contentious vote on Sunday, President Nicolás Maduro effectively liquidated any political challenge that the opposition might present for him for years to come. Around midnight, officials certified the creation of a new political body, known as the constituent assembly, with the power to rewrite the Constitution to favor Mr. Maduro and empowered in the meantime to dismiss any branch of government viewed as disloyal.

It was a dramatic crash for the country’s opposition in its long quest to regain control of Venezuela after a tide of popular discontent brought Hugo Chávez to the presidency in 1999. Not since the politicians joined the military to back a failed coup in 2002 — which spurred Mr. Chávez to purge his opponents — have members of Venezuela’s opposition been laid so low.

“They played all their cards, and they played them effectively,” said Christopher Sabatini, a foreign policy expert at the Columbia University School of International and Public Affairs, citing the opposition’s attempts to parry Mr. Maduro this year. “But now all of their channels for representation and means for mediation have essentially evaporated.”

Mr. Maduro’s decision to sweep aside his rivals leaves them at a difficult crossroads, analysts said. Having finally succeeded at the ballot box after years of trying, the opposition finds itself having to contain popular anger on the streets, with some Venezuelans now insisting that violence is the best way to confront the president.

More than 120 people have already died in months of protests, with Sunday being the most deadly day of all.

Now, two leaders of the opposition have been taken from their homes by government security forces, according to their families (via Reuters):

Venezuelan security officials seized two opposition leaders from their homes in overnight raids, their families said on Tuesday, after they urged protests against a new legislative superbody widely denounced as anti-democratic.

Leopoldo Lopez and Antonio Ledezma were both under house arrest, the former for his role in leading street protests against President Nicolas Maduro in 2014 and the latter on charges of plotting a coup.

"12:27 in the morning: the moment when the dictatorship kidnaps Leopoldo at my house," Lopez's wife Lilian Tintori wrote on Twitter.

She posted a link to a video that appeared to show Lopez being led into a vehicle emblazoned with the word Sebin, Venezuela's intelligence agency.