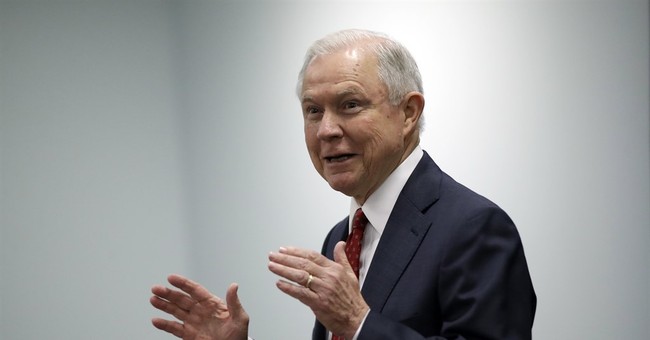 President Trump took to Twitter to slam Attorney General Jeff Sessions for his lackluster performance on Hillary Clinton’s alleged crimes. It comes after he described his top legal enforcer as “beleaguered” yesterday. Sessions recused himself from the Russia investigation, a move that was not well received by the president. Trump feels that this recusal led to special counsel Robert Mueller being appointed to quarterback the investigation. Mueller also reportedly has access to almost a decade’s worth of Trump tax returns and other financial records, which has angered the president. There was talk about Rudy Giuliani replacing Sessions. Even Sen. Ted Cruz (R-TX) was mentioned, though he’s denied the claim. Giuliani also said he's not being considered.

Nevertheless, the Associated Press is reporting that Trump has spoken to his advisers about finding ways to remove Sessions from DOJ.

The president’s anger again bubbled into public view Monday as he referred to Sessions in a tweet as “beleaguered.” Privately, Trump has speculated aloud to allies in recent days about the potential consequences of firing Sessions, according to three people who have recently spoken to the president. They demanded anonymity to discuss private conversations.

Trump often talks about making staff changes without following through, so those who have spoken with the president cautioned that a change may not be imminent or happen at all. What is clear is that Trump remains furious that the attorney general recused himself from the investigations.

“So why aren’t the Committees and investigators, and of course our beleaguered A.G., looking into Crooked Hillarys crimes & Russia relations?” Trump tweeted Monday. His tweet came just hours before his son-in-law, White House senior adviser Jared Kushner, traveled to Capitol Hill to be interviewed about his meetings with Russians.

Trump’s intensifying criticism has fueled speculation that Sessions may resign even if Trump opts not to fire him. During an event at the White House, Trump ignored a shouted question about whether Sessions should step down. The attorney general said last week he intended to stay in his post.

If Trump were to fire Sessions, Deputy Attorney General Rod Rosenstein would be elevated to the top post on an acting basis. That would leave the president with another attorney general of whom he has been sharply critical in both public and private for his handling of the Russia probe, according to four White House and outside advisers who, like others interviewed, spoke on condition of anonymity to discuss private conversations.

Many have noted that firing Mueller could be a catastrophic move for the Trump White House, though for now, the Sessions firing watch has begun. When Congress and the president of the United States are attacking you, it’s hard to survive it. As Guy noted at our Salem Day radio event at The White House, communications director Anthony Scaramucci said that Trump probably wants to let Sessions go.