Wait–The Person Who Wanted Trump Jr. to Have This Russian Meeting Is An 'Enrique Iglesias Wannabe' Pop Star? 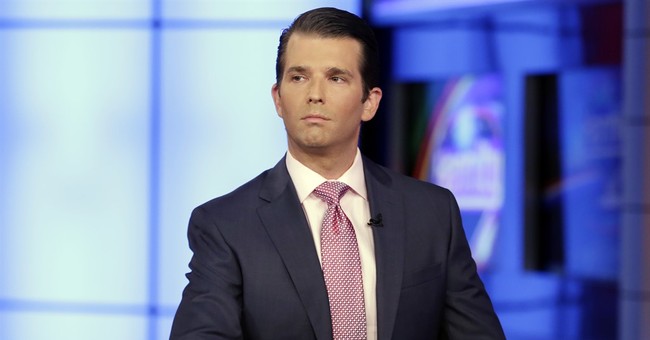 Well, Donald Trump Jr. and the Trump White House are about to have a bad week. It could morph into a bad month. After months of zero evidence of collusion between the Trump campaign and the Russians, Trump Jr. apparently was enticed to meet with a Russian lawyer Natalia Veselnitskaya, where some dirt on Hillary Clinton was reportedly found by sources with the Russian government who intended to help his father win the 2016 election. The meeting occurred on June 9, 2016 in Trump Tower. Trump Jr. did not know Ms. Veselnitskaya’s name prior to the meeting. From her account, Jared Kushner, Trump’s son-in-law and top adviser left, Paul Manafort, Trump’s former campaign manager was on his phone most of the time, and she did not have dirt on Clinton. The meeting then centered on the Magnitsky Act, which targets Russian abusers of human rights; a sore point between both nations, which led to Vladimir Putin banning American adoptions. Yet, the bait for the meeting—compromising information—seems to have been a ruse. Nevertheless, Rob Goldstone, the person who set up the meeting at the request of Russian pop star Emin Agalarov, explicitly said this information came from the Russian government with the intent to help Donald Trump; Goldstone is Agalarov's publicist. Concerning the information in question, Trump Jr.’s response on June 3, 2016 was “Thanks Rob I appreciate that. I am on the road at the moment but perhaps I just speak to Emin first. Seems we have some time and if it’s what you say I love it especially later in the summer. Could we do a call first thing next week when I am back?”

By this account, Jared left meeting early and Mannafort looked at his phone the whole time https://t.co/NSdwlO6L1F

The bad news is that this does put the credibility of the whole zero evidence of collusion on the chopping block. You can read Guy’s take on it here. There is something to put under the microscope, but that’s about it. There’s still no evidence of collusion, only that Trump Jr. might have been tempted to wade into this pool. The meeting itself wasn’t illegal. No damning information on Clinton was divulged at the meeting. Here’s Ed’s take on the meeting and Donald Trump Jr. released the entire email chain regarding this meeting [emphasis mine]:

.@brithume: As far as we know collusion didn't occur. What we have so far is a meeting that went nowhere #Tucker @FoxNews

As bad as this looks, it’s still lacking for evidence of actual collusion in a legal context. It is evidence of dishonest representations from the principals involved in the meeting, and it certainly shows a reckless disregard for the issue of collusion. As John Dickerson put it this morning, it paints Don Jr as “collusion curious.” However there still isn’t any evidence that any quid pro quo took place, and the NYT alludes to that in the new article too

Don Jr continues to insist that nothing came of it, and that it’s normal practice to look for negative information on one’s political opponents. That’s certainly true, but it’s not normal to conspire with agents of foreign governments to get that dirt — although both sides did exactly that in the 2016 campaign.

At best, what this demonstrates is a bungling, amateurish operation that still managed to win because of the nature of their opponent. That matches up well against the amateurish and bungling manner in which Don Jr and the White House have dealt with the Veselnitskaya meeting, and their serial dishonesty raises serious questions about what we still haven’t discovered about their activities. No one can seriously rely on their denials after this debacle, especially after Don Jr keeps issuing denials while revealing evidence that immediately contradicts them.

And the amateur hour aspect was definitely picked up by one of the Trump’s favorite publications, The New York Post, where the editorial board called him an “idiot.” Yet, let’s look at the source for the meeting—Rob Goldstone and his client, Mr. Agalarov. As Democrats gather their blood lust over these emails, Russian journalist, Alexey Kovalev, who doesn’t appear to be a fan of Putin, covering propaganda and fake news in his home country with media analysis, notes that this pop star “can only books gigs at a strip mall his dad owns” outside of Moscow. The warning is that these probably aren’t the orchestrators of some nefarious plot by the Kremlin.

These are the folks you're presenting as masterminds in a massive, omniscient conspiracy. America, you should really sober up.

“America, you should really sober up,” he tweeted.

This is Rob Goldstone, by the way:

This is the guy we're told was the linchpin of a massive global conspiracy pic.twitter.com/ks34nMuQqr

The other thing that’s being peddled is that Trump Jr. committed treason. He did not, according to constitutional law professor Jonathan Turley. Even CNN’s legal experts said there is nothing illegal here, and that even under U.S. law there is nothing felonious about receiving compromising information from a foreign source (via The Hill):

A CNN legal analyst said Tuesday that Donald Trump Jr.'s emails setting up a meeting with a Russian lawyer last year would likely be examined as part of the federal probe into possible ties between the Trump campaign and Russia, but warned against making any conclusions about a possible crime.

"I think this is really going to be one of the most important documents that ... [special counsel Robert] Mueller looks at, who is doing this investigation," said Paul Callan, a former New York homicide prosecutor and media law professor.

Callan, however, warned about simply concluding that "this is criminal as opposed to political stupidity."

"There’s nothing in American law that I’m aware of that would prohibit a candidate from accepting damaging information, even from an enemy foreign government, to use against a political opponent," Callan said.

"And I think it’s absurd to say this could be treason."

Veselnitskaya dangled anti-Clinton info and Jr. fell for it. More abt Trumpistas stupidity and venality than nefarious Kremlin plot.

Was this the right course of action? That’s a debate for those within the conservative movement. There are a lot of people who are disgusted by this event, some think it’s a nothing burger, and others are just indifferent. I think it’s worthy of an inquiry, especially since Trump Jr. was not truthful concerning the timeline of these events. Yet, I also think that nothing legally wrong happened here. That’s the immediate concern for anyone who wants this White House to succeed. Will there be any legal ramifications that can truly hamstring the Trump administration with the Russian collusion story? They can’t be as forceful with the zero evidence talking points. That’s now gone. At the same time, like Ed said, there’s no evidence of collusion, only that Trump Jr. was pondering it, which isn’t good, especially with the rabid anti-Trump media ready to pummel this administration over any little thing. It also shows gross incompetence; Trump Jr. should have known better. The only saving grace is that this isn’t the smoking gun liberals are hoping for with regards to the Russian drama. And they’re certainly going to overreach in their quest to draw blood from this president.

In the end, the Russians did not change the election tallies. The end result was not due to Russian interference. Hillary Clinton lost the 2016 election to Donald Trump. Period.

"When you get information that the Russians want to dig dirt on your opponent...and support you in your election, you go to the FBI" https://t.co/zbL1sUjAPd

Now, Allahpundit asks who gave The New York Times the emails because Trump Jr. definitely pre-empted them by releasing them before they did.

Last night, Donald Trump Jr. had an interview with Fox News' Sean Hannity to discuss the events surrounding the meeting, where he admits that he probably would have handled things differently. Yet, he did add that this all occurred before the Russian hysteria occurred in the news media.