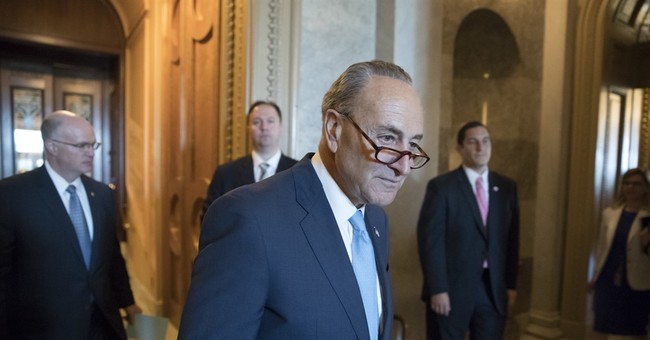 Senate Democrats took over the floor to protest Neil Gorsuch’s nomination to the Supreme Court. Okay—that’s not exactly fair. It was mostly Sen. Jeff Merkley (D-OR), but they held another slumber party over global warming. Over on the House side, Democrats occupied the floor to force a vote on gun control after the horrific mass shooting at the LGBT Pulse nightclub in Orlando. And now, Democrats are going to takeover the Senate floor again for the lack of transparency over the GOP health care bill…until about midnight (via Politico):

Senate Democrats are escalating their attack on Republicans’ plans to repeal Obamacare this week, though their party remains divided on how far to take activists’ demands that they shut down the Senate in protest of the GOP’s dismantling of the Affordable Care Act.

Democratic senators are planning to hold the Senate floor until at least midnight on Monday to thrash Senate Republicans for refusing to hold committee hearings on their healthcare overhaul, according to several people familiar with the plan. The round of speeches is being organized by Sens. Patty Murray of Washington state and Brian Schatz of Hawaii.

But on the more weighty question of whether to object to the GOP’s committee hearings or refusing to allow routine business in the Senate regarding nomination votes or uncontroversial matters, the party has made no final decision. While the party’s liberal wing is demanding that Senate Minority Leader Chuck Schumer of New York and his team shut the Senate down, Schumer has made no decision and often tries to forge consensus in his caucus before executing party strategy.

Though several sources on the party's left believe Schumer may be open to the idea, Democratic leaders have been resistant to procedural obstruction thus far. They believe blocking unrelated matters could shift the spotlight from Republicans’ secretive process to Democratic obstruction.

Democrats are now upset about the lack of transparency over a health care bill. Well, that’s just the seat of irony.