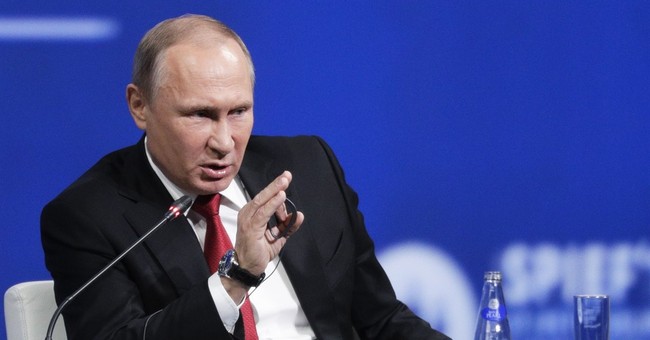 So, here’s another angle to the Russian drama that’s gripping our headlines. Of course, the Russian collusion probe will continue, but what about the leaks? Over the weekend, Reality Leigh Winner (yes, her name is Reality Winner) was arrested by the FBI for leaking classified documents to The Intercept, a news site edited by Glenn Greenwald, formerly of The Guardian, who reported on the sensitive information provided by ex-NSA contractor Edward Snowden. Winner’s documents related to allegations that Russian military intelligence hacked a voting software company. The question is did the Russians merely exploit our intelligence community’s willingness to leak such sensitive material? It’s a question posed by Holman W. Jenkins, Jr. in The Wall Street Journal.

He also added that President Trump’s habit of dabbling with conspiracy theories might have caught the eyes of the Russians concerning false information, betting that agencies would leak, and American stupidity. In some ways, he’s not wrong. An odd mixture of being a sore loser, coupled with a light form of Russophobia, has hit the political Left. Yet, it could lead to a more embarrassing result, which is that our intelligence community became  “unwitting agents of Russian influence." The bombshell to set this off that question was former FBI Director James Comey breaking protocol during the Clinton email investigation over an alleged email from a Democratic operative that detailed confidence that then-Democratic Attorney General Loretta Lynch will not let the email probe go too far. The problem: it was not authentic—and Comey knew that was the case (via WSJ):

Are you now thinking of the Trump dossier circulated by former British agent Christopher Steele, which also felt like a Russian plant? While the political circus in Washington has focused on purloined Democratic emails and fake news spread during the election by Russian bots, the more effective part of Moscow’s effort may have been planting fake leads to prod U.S. enforcement and intelligence agencies to intervene disruptively in the campaign.
This also should shed new light on today’s anti-Trump leakers in the intelligence agencies: They may be the real unwitting agents of Russian influence.
There are plenty of lessons to go around. Mr. Trump, if he ever really thought Vladimir Putin was his friend, probably has wised up by now. He should have wised up the moment the Steele document came into view, supposedly based on plumbing Mr. Steele’s peerless Russian intelligence contacts. It always appeared possible, even likely, that Mr. Steele was the semi-witting vehicle for Russian rumors designed expressly to undermine Mr. Trump just as Russia was also trying to undermine Mrs. Clinton.
Plenty of people in Washington could also afford to rethink how their partisan idiocy makes them soft touches for such Russian disruption efforts. That includes Rep. Adam Schiff, top Democrat on the House Intelligence Committee. It includes Mr. Trump too. Overdue is an inquiry into a possible Russian role in flogging the birther conspiracy and the 9/11 truther miasma. Mr. Trump, who loves a conspiracy theory, might consider how he and his ilk showed Russia a vulnerability in American political discourse that it could exploit.
Let’s remember that ex-FBI chief Robert Mueller’s mission is to investigate Russian influence in the election, not the narrow matter of Trump collusion. Whether Russia suborned or tried to suborn people like Paul Manafort, Carter Page and Michael Caputo is a necessary question. Whether Russia exploited Facebook to proliferate fake anti-Hillary news is a necessary question. But so is the provenance of the Steele document and the fake email purporting a Democratic coverup of Hillary Clinton’s server activity. If the FBI’s Mr. Comey allowed himself to be manipulated by Russian intelligence into intervening in the race, that’s something we need to know about. And we need to know about the leaks.
[…]
It’s times like this we are reminded how personally stupid are many people who make up the media. These leaks need to be investigated—and by Mr. Mueller specifically to the extent that the leaks, as seems more and more likely, indirectly or partly have their origins in Russian manipulation of our own intelligence and law enforcement agencies.
Democrats wanted an independent counsel investigation of Russia’s election meddling. They believed it would lead to evidence of, or at least keep alive the story of, Trump collusion. They may be unpleasantly surprised where it really leads.