NYT: Comey Told AG Sessions He Didn’t Want To Be Alone With Trump 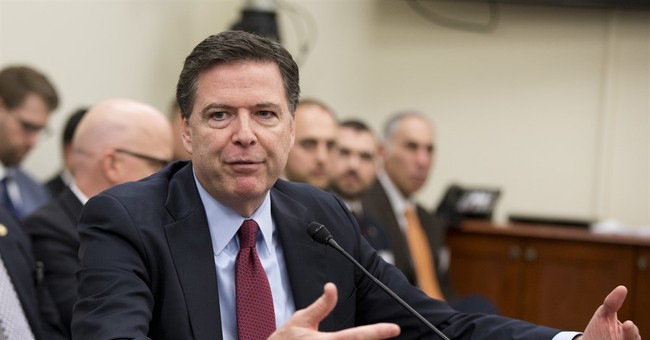 Well, tomorrow is the day. Former FBI Director James Comey, who was fired by President Trump in early May, is set to give his testimony before the Senate Intelligence Committee on communications he had with the president, specifically over the ongoing investigation into former National Security Adviser Michael Flynn. Mr. Comey wrote detailed memos about from his major interactions with the president. In this instance, we know from a copy of the former FBI director’s testimony, which was released yesterday that the president told the then-FBI chief, “I hope you can see your way clear to letting this go, to letting Flynn go. He is a good guy. I hope you can let this go.” Mr. Comey agreed that Flynn was a good guy; he noted that Mr. Flynn was a colleague in his capacity as Director of the Defense Intelligence Agency, and that the two men had a good working relationship at the outset of his term as FBI director.

Mr. Comey also noted that the president, to his knowledge, was only referring to the Flynn probe, not the Russian interference investigation as a whole. So, the reports of this interaction are confirmed. The only difference is that we don’t know if this is evidence of obstruction of justice. Mr. Comey did not make any such accusations his testimony. At the same time, after the one-on-one meeting about Flynn, he did not feel comfortable meeting with the president alone and told Attorney General Jeff Sessions about it (via NYT):

The day after President Trump asked James B. Comey, the F.B.I. director, to end an investigation into his former national security adviser, Mr. Comey confronted Attorney General Jeff Sessions and said he did not want to be left alone again with the president, according to current and former law enforcement officials.

Mr. Comey believed Mr. Sessions should protect the F.B.I. from White House influence, the officials said, and pulled him aside after a meeting in February to tell him that private interactions between the F.B.I. director and the president were inappropriate. But Mr. Sessions could not guarantee that the president would not try to talk to Mr. Comey alone again, the officials said.

Mr. Comey did not reveal, however, what had so unnerved him about his Oval Office meeting with the president: Mr. Trump’s request that the F.B.I. director end the investigation into the former national security adviser, Michael T. Flynn, who had just been fired. By the time Mr. Trump fired Mr. Comey last month, Mr. Comey had disclosed the meeting to a few of his closest advisers but nobody at the Justice Department, according to the officials, who did not want to be identified discussing Mr. Comey’s interactions with Mr. Trump and Mr. Sessions.

[…]
His unwillingness to be alone with the president reflected how deeply Mr. Comey distrusted Mr. Trump, who Mr. Comey believed was trying to undermine the F.B.I.’s independence as it conducted a highly sensitive investigation into links between Mr. Trump’s associates and Russia, the officials said. By comparison, Mr. Comey met alone at least twice with President Barack Obama.

A spokesman for the F.B.I. declined to comment on Mr. Comey’s request. A Justice Department spokesman, Ian Prior, said, “The attorney general doesn’t believe it’s appropriate to respond to media inquiries on matters that may be related to ongoing investigations.”

Guy will have a deeper analysis on Mr. Comey's remarks tomorrow morning