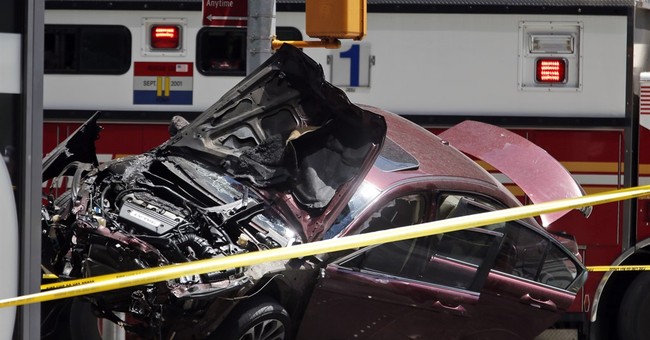 Christine wrote about a tragic incident that occurred in New York City Thursday afternoon. A driver going through Times Square plowed through a crowd of people, killing one person and injuring over 20 others. The driver Richard Rojas, a Bronx native, was immediately taken into custody. The NYPD was rather quick in dispelling any rumors of terrorism, instead alleging that it could be an act of drunk driving. Rojas had two prior DUI arrests. Yet, Christine mentioned that Rojas might have been under the influence of drugs, not alcohol, and he was possibly looking to committing suicide by cop. Details are still trickling in, but what we do know via CNN is that Rojas is being charged with 20 counts of attempted murder:

Richard Rojas, the man who allegedly struck a group of pedestrians with his vehicle in Manhattan's Times Square Thursday, has been arrested and charged with murder, 20 counts of attempted murder and five counts of aggravated vehicular homicide, according to a press release from the New York City Police Department. An 18-year-old woman was killed and at least 22 people were injured when a speeding car plowed into pedestrians, city officials said.

NBC 4 New York reported that Rojas reportedly heard voices in his head telling him to hurt people. He may have a history of mental illness as well.

An 18-year-old woman was killed and 22 people were injured when 26-year-old Richard Rojas turned the wrong way onto Seventh Avenue in the heart of Times Square and sped along the sidewalk for three-and-a-half blocks, police said.

As Rojas was being arrested, police said he was acting out of control and seemed impaired. He told police he heard demons in his head and voices telling him to hurt people, sources said, adding he has a history of psychiatric problems.