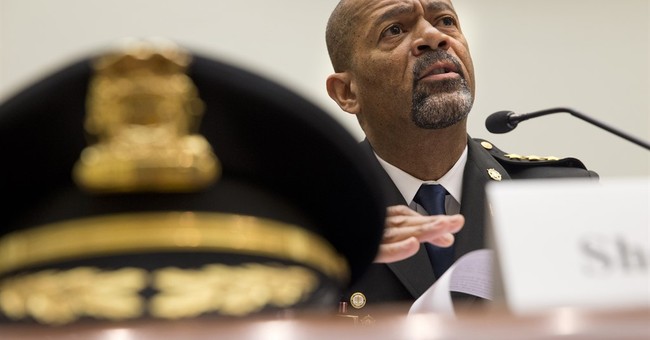 Outspoken Sheriff David Clarke’s appointment to the Department of Homeland Security is up in the air, despite the former saying that he was "honored and humbled" to accept the position. Cortney wrote about it, but later added that DHS is not confirming whether Mr. Clarke even has the job (via CNN):

Asked about Clarke's announcement, an administration official told the CNN "The position in question is a secretarial position and is therefore a question for DHS."

In an emailed statement, DHS spokeswoman Jenny Burke said, "The position mentioned is a Secretarial appointment. Such senior positions are announced by the Department when made official by the Secretary. No such announcement with regard to the Office of Public Engagement has been made."

We’ll soon find out if Mr. Clarke spoke too soon, or whether he should have opened his mouth at all about the position. One thing was clear, however—the Obama staffers who served in that position were rather unhappy about Clarke being even considered as their successor (via the Hill):

Philip McNamara and Juliette Kayyem each served as the assistant secretary for Intergovernmental Affairs at DHS during the Obama administration and railed against their apparent successor on Twitter.

“I'm being replaced @DHSgov by #SheriffClarke. My job was to work with state and local officials. Clarke says he wants to strangle #Democrats,” McNamara said after news broke that Clarke said he accepted the position.

“For those of you I'm just meeting, Clarke is taking my old position under Obama. I am floored. And feel for my career staff,” Kayyem tweeted.

Ms. Kayyem cited a grand jury indictment against the staff at one of the jails Sheriff Clarke oversees in her CNN op-ed/letter warning DHS Secretary John Kelly not to hire him. The indictment was handed down after an inmate died in one of the jails.

The announcement was met with a flurry of criticism: Clarke, who is staunchly conservative, said earlier this year that the only time he would reach across the aisle would be to grab a Democrat "by the throat." And previously he had compared the Black Lives Matter movement to the Ku Klux Klan.

But Clarke is not just a provocative speaker. On his watch, prisoners have died, a woman lost a baby during childbirth and, most recently, an inmate deprived of water for a week died.

We've only met once, Secretary Kelly, but I was publicly complimentary of your appointment. And I still serve on the department's Homeland Security Advisory Committee until my term expires this summer. I fundamentally disagree with many of the policies at DHS right now, but

I still believe in the mission: to protect our communities from all threats and assist them when tragedy occurs.

So I hope you keep pushing back. Because there is one thing I know for sure: Clarke is not only unfit to serve, he will not serve you well. His divisive rhetoric and action will make him an impossible figure for communities to engage with -- and that is a critical part of the job.

I should know. I had the job in the Obama administration.