NYT: Comey Thought Announcement Of His Dismissal Was A Prank 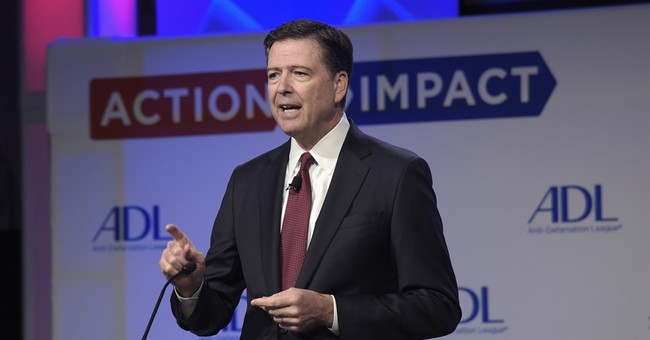 When it became known that President Donald J. Trump had fired James Comey, the now former FBI director thought it was a joke, according to The New York Times. Mr. Comey was dismissed over how he handled the investigation into Hillary Clinton’s emails, which was due to the former first lady setting up an unsecure and unauthorized private email system to conduct official State Department business while serving as our top diplomat in the Obama administration. The nature of the system led to allegations that she might have mishandled classified information and put our national security at risk. How Mr. Comey conducted himself during the investigation went way beyond the purview of his office, according to a scathing four-page memorandum by Deputy Attorney General Rod J. Rosenstein.

Comey learned of firing as he addressed FBI employees in LA. TV screens in background flashed news of firing. Letter was then given to FBI.

Mr. Rosenstein noted the breaches in protocol stemming from the July 5, 2016 press conference, where Mr. Comey noted the negligence Mrs. Clinton and her staff exhibited when handling sensitive government documents and publicly excoriated the former first lady after he announced that charges would not be recommended against her. That lashing crossed the line, according to the DOJ. The memo also cited former attorneys general and deputy attorneys general, who all noted how Mr. Comey overstepped his bounds concerning the investigation and led to the Bureau falling into disrepute. In short, the memo is a scathing indictment on how Mr. Comey’s tenure led to the FBI being damaged as an institution, and that to move forward a new director must be selected [emphasis mine]:

Mr. Comey was in Los Angeles at an FBI recruitment event when he heard of his firing on television screens as he reportedly addressed the attendees. He later heard that he was fired after a phone call.

Mr. Comey was addressing a group of F.B.I. employees in Los Angeles when a television in the background flashed the news that he had been fired.

In response, Mr. Comey laughed, saying he thought it was a fairly funny prank.

Then his staff started scurrying around in the background and told Mr. Comey that he should step into a nearby office.

Mr. Comey stopped addressing the group. He proceeded to shake hands with the employees he had been speaking to. Then he stepped into a side office, where he confirmed that he had been fired. At that point, he had not heard from the White House.

Shortly thereafter, a letter from Mr. Trump was delivered to the F.B.I.’s headquarters, just seven blocks from the White House.

Mr. Comey’s day had begun in Florida, where he spoke to a group of police officers. He then flew to Los Angeles, where he was also scheduled to speak at a diversity meeting.