Deputy AG On Comey: There Is No Way To Defend His Handling Of The Hillary Email Investigation 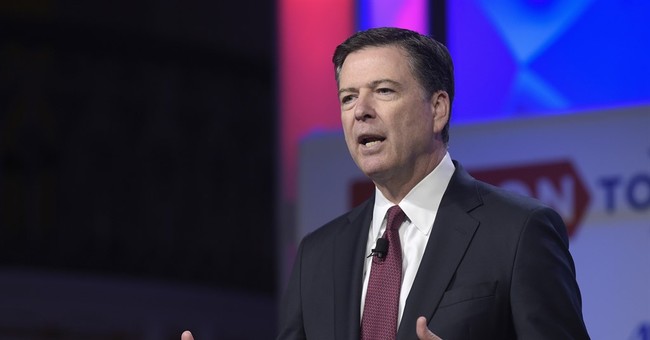 Confirmed on April 25, Deputy Attorney General Rod J. Rosenstein reportedly worked with his boss, Attorney General Jeff Sessions, on laying down the groundwork to dismiss FBI Director James Comey over the past week. The now ex-FBI director was in Los Angeles at a recruitment event, when he reportedly heard of his firing while addressing attendees at the venue. He saw the television screens blast the chyron. He later was read his pink slip over the phone. On face value, it’s a horrible breach in decorum regarding informing someone that they lost their job. Yet, those same feelings of unprofessionalism ooze from the pages of the memorandum by Mr. Rosenstein about how the Trump administration could restore public confidence in the FBI, which has been the subject of criticism and scorn for months. Democrats were irate over the October 28, 2016 letter that Mr. Comey issues to Congress, informing them that the FBI would be reviewing new emails that were found on a laptop that we learned belonged to Anthony Weiner, husband of top Clinton aide Huma Abedin. Republicans were still vexed and perplexed over the FBI declining to press charges against Hillary Clinton during his July 5, 2016 press conference.

In the memo, Rosenstein openly says, “I cannot defend the Director’s handling of the conclusion of the investigation of Secretary Clinton’s emails, and I do not understand his refusal to accept the nearly universal judgment that he was mistaken. Almost everyone agrees that the Director made serious mistakes; it is one of the few issues that unites people of diverse perspectives.”

Second, Rosenstein added that Mr. Comey had usurped the authority of the U.S. Attorney General during his July 5 presser when he announced that the case should be closed without any charged being filed against Mrs. Clinton.

“At most, the Director should have said the FBI had completed its investigation and presented its findings to federal prosecutors.”

The deputy attorney general mentions the conflict Mr. Comey felt then-Attorney General Loretta Lynch had concerning her meeting with former President Bill Clinton on the tarmac in Phoenix last year, though he added that whatever the case—it does not give him the authority to “supplant federal prosecutors and assume command of the Justice Department.”

“Compounding the error, the Director ignored another longstanding principle: we do not hold press conferences to release derogatory information about the subject of a declined criminal investigation,” Rosenstein wrote. “The Director laid out his version of the facts for the news media as if it were a closing argument, but without a trial. It is a textbook example of what federal prosecutors and agents are taught not to do.”

“The goal of a federal criminal investigation is not to announce our thoughts at a press conference,” he added.

Rosenstein also took issue with Mr. Comey’s use of the word "conceal" regarding his decision to inform Congress less than three weeks from Election Day, calling it “a loaded term that misstate the issue. When federal agents and prosecutors quietly open a criminal investigation, we are not concealing anything; we are simply following the longstanding policy that we refrain from publicizing non-public information. In that context, silence is not concealment.” He cited past attorneys general, Michael Mukasey and Alberto Gonzalez, and deputy attorneys general, Jamie Gorelick and Larry Thompson, to name a few—all of whom said that Mr. Comey’s conduct went beyond his purview, broke away from standard protocols regarding the disclosure of investigation, and damaged the reputation of the FBI.

The deputy attorney general then states that because Mr. Comey refuses to admit his mistakes, there should be no reason to expect that he can help mend the reputation of the Bureau. As a result, the FBI will not recover from its public image issues until a new director is found.

While Mr. Comey’s July 5 presser on Clinton was seen as an indictment of her character, this memo appears to have the same damning impact on the former FBI director.

Yet, circling back to The New York Times’ report on Mr. Comey during the 2016 election, we found that there was reportedly a memo by a Democratic operative, who was confident that then-AG Lynch would let the email probe go too far. This was during the period where Russia was running its interference campaign and trying to infiltrate the servers at the Democratic National Committee. From time to time, U.S. intelligence agencies were able to see what the Russian took; this memo was in the batch. Mr. Comey feared that if this was released and no charges were filed, the independence of the investigation would be in doubt. Things reached a boiling point when Lynch met with former President Bill Clinton on her airplane in Phoenix for about 20-30 minutes, where we were told that all they discussed was grandkids and golf. That was never going to fly. Hence, the strongly worded July 5 presser to make sure the appearance was that the Democratic-run DOJ was not tipping the scales for the Democratic nominee for president. Some can argue that this was a proper course of action, or at least understand it—but Mr. Sessions and Mr. Rosenstein thought otherwise.

Regardless, Mr. Comey was a man who overall earned the respect of his colleagues. Former U.S. Attorney Matthew Whitaker, executive director for the Foundation for Accountability and Civic Trust, had this to say about his dismissal:

"I've known James Comey for many years, and I can say that while I didn't always agree with his decisions, he was without a doubt a most upstanding public servant who always strived to put the rule of law above partisan politics. While recent events unfortunately made it challenging for him to continue in his capacity as FBI Director, the many important contributions he made to our country, including fighting terrorism both at home and abroad, should not be overlooked. He is a man of integrity that no doubt will continue to serve him well as he looks to the future."

Still, the president made a decision and it was followed through.