Warren: Trump Won Partially Because Of An ‘Ugly Stew of Racism’... It's In My Book That Shows My Ignorance Of American Society 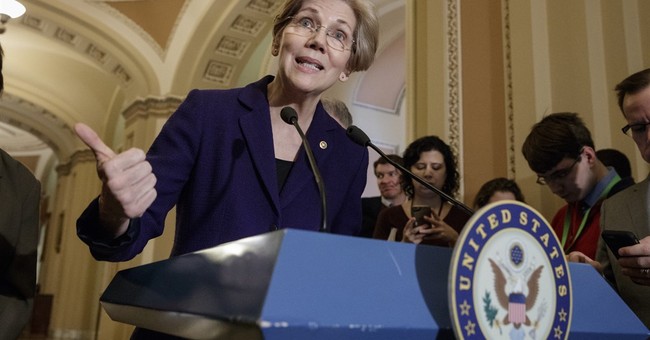 Sen. Elizabeth Warren (D-MA) is becoming one of the Trump administration’s most brutal critics. She’s supposedly a contender for the 2020 nomination, though I think it’s way too early to even think about the next election. What we can discern from her appearance on MSNBC’s Rachel Maddow’s show this week is that she doesn’t get why Democrats lost in 2020. The path out of this isn’t hard. Reach out to the tens of million of white working class voters that dot rural America, talk jobs, talk pension protection, talk better trade deals, and leave out the political correctness. These voters are die-hard Republicans; they’re swing voters. Yet, Warren thought it was easier to just say that white working class concerns were partially based on racism, a piping hot stew of racism (via The Hill):

Sen. Elizabeth Warren (D-Mass.) on Wednesday said President Trump's electoral win in November was, in part, the result of "an ugly stew of racism."

Asked by MSNBC's Rachel Maddow why white middle-class voters would cast their ballots for Trump, Warren said the real estate mogul was able to tap into a deep-seated anger felt among low- and middle-income voters by placing blame on ethnic and religious minorities.

“Part of it is an ugly stew of racism," Warren said. "Part of it is Donald Trump tapped into anger. He got that people are deeply angry.”

The Guardian’s Chris Arnade logged 100,000 miles covering areas that Trump is talking about in his speeches and the ones that Democrats should focus on if they want to retake Congress and the presidency. He found that even those who don’t support Trump, and think he’s nuts, were not surprised by his win. One man Arnade encountered on his travels, Anthony Rice, an African-American living in Youngstown, Ohio, said, “Obama promised a lot and only a little came of it. Maybe New York City got delivered promises. This street here is still filled with homes falling down.”

To get out beyond successful neighborhoods in D.C., New York City and the elite college campuses – beyond where prevailing socio-political opinions are made – is to see another America.

It isn’t a more “real” America – a glib and offensive cliche – it is simply a different one. It is an America that values and experiences different things, emphasizing local community and faith, rather than career or educational status. It is an America that has been on a downward trajectory for decades, hurt by the loss of jobs and with downtowns emptied of energy and filled with drugs. It has made staying in these communities harder.

In this America hope is fading, not growing. People’s lives are a constant tangle of changing and uncertain jobs. The path that offers a way out – education – requires threading a narrow needle of opportunities from an early age. If that small chance is missed it means a lifetime of feeling looked down on by the “other America.”

In these towns, “America already is great” rings hollow and offensive.

And with all of that, saying that they voted based on racism is typical liberal bubble logic that cost them the Democrats the race. It’s part of the condescending superiority complex liberals have with their policies. They’re always right, so when folks disagree—these people are racist, sexist, misogynistic, transphobic, or Islamophobic because it’s the easiest thing to do. No wonder why folks rejected them in the tens of millions. Democrats’ only saving grace is that California, which is loaded with liberals, was able to give Hillary Clinton a few million more votes, which precipitated the nauseating and worthless talking point that she won more popular votes. Yep, she won more popular votes, but not a majority. Trump is president and she’s not, but the truth is that Democrats will leech onto anything that will diminish and discredit Trump.

Right now, Warren seems to be building her 2020 candidacy through a book tour, which even some staunch liberals say is a little scarce on details. So, while Warren says that Trumpland is motivated by racism, which is just a rehashing of Clinton’s deplorable remarks, her “This Fight Is Our Fight” to save the very people she called racist is being described as a condescending incomplete blueprint that shows her limitations of understanding American society. Ouch. By the way, Paul Krugman was the person who described the manuscript as the mile wide, but inch deep manifesto for a progressive renaissance. I think The Atlantic’s Emma Green’s review of the book pretty much says it all; especially on how it’s pretty much just a louder version of the Clinton campaign. Warren and company can call Trump supporters anything they like. They still don’t get it.

Warren’s book also reveals the moral languages the senator is less able to speak. She never truly grapples with why Democrats lost, why middle-class voters would choose Trump or whether their anger might be about more than the economy. Warren sees the world through the narrow lens of economic interests, ignoring the deeply held values and beliefs that often determine people’s politics. This attitude is condescending, but more important, it limits Warren’s understanding of America — and why her party has failed so badly.

Warren has a playbook for Democrats: Talk about the middle class, not the poor. Focus on regulation and corruption, not taxing and spending. And at every possible moment, highlight the hypocrisy and corruption of the other side. She details policy proposals in bulleted lists and anecdotes, mixing stories from her Oklahoma childhood with narratives about middle-class Americans who worked hard and still ended up struggling with money.

“This Fight Is Our Fight” could conveniently double as a slogan for a national campaign, one very different from Clinton’s “Stronger Together.”

Yet the story Warren tells about the election and America’s anxieties is curiously one-dimensional. She uses standard progressive math to explain Trump voters: Some are racist bigots, some were taken in by a huckster casino owner, and some are suffering from intense economic despair. One of the women she follows, Gina, lives in a mobile home in a small North Carolina town. She and her husband barely get by on her hourly wage from Walmart. “We need to tell this story!” Gina tells Warren. “But I really need this job.”

Gina, we find out at the end of the book, “proudly voted for Donald Trump, hoping he would ‘shake things up.’ ” In Warren’s world, the Democratic Party would win the vote of every Gina in America by fighting for a “playing field that isn’t tilted so hard against her.” But Warren never really tells us why America’s Ginas aren’t voting for Democrats now.