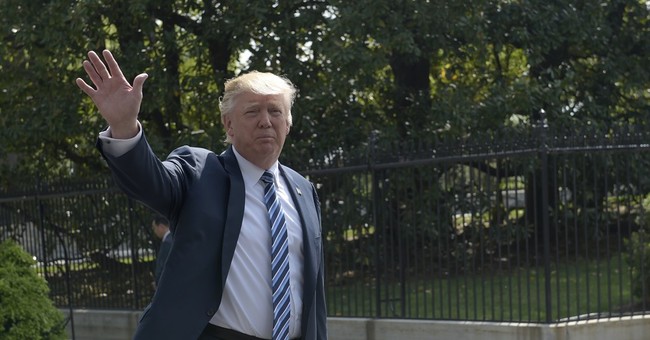 Okay, so we have some new updates about the allegations of Russian collusion with the Trump campaign. The first is that Trump adviser Carter Page's communications were monitored through a FISA warrant obtained by the FBI. Second, the FBI cited the unsubstantiated dossier compiled by a former British intelligence operative to help make the case for the warrant. What we do know about the dossier so far is that much of it is unverified. Moreover, the only thing we can confirm about its contents is that Russians talked to other Russians, but we don’t know what they talked about. There were other salacious details, which I will not go into, and those have been unsubstantiated as well. In all, the dossier’s contents remains largely in doubt. It was part of an opposition research project conducted on behalf of Democrats and anti-Trump Republicans.

Democrats have a new avenue to walk down on regarding this allegation since Page was reportedly a target for recruitment by Russian intelligence services dating back to 2013. What we do know is that Page’s trip to give a lecture at the New Economic School in Russia back in July brought him under the FBI’s microscope again. By September, the FBI obtained their FISA warrant, though Carter Page had resigned from the campaign. After the new reports about Page, FISA, and Russia, there are more questions than answers and there is still no solid evidence of Russian collusion (Via NYT)) [emphasis mine]:

Ever since F.B.I. investigators discovered in 2013 that a Russian spy was trying to recruit an American businessman named Carter Page, the bureau maintained an occasional interest in Mr. Page. So when he became a foreign policy adviser to the Trump campaign last year and gave a Russia-friendly speech at a prestigious Moscow institute, it soon caught the bureau’s attention.

That trip last July was a catalyst for the F.B.I. investigation into connections between Russia and President Trump’s campaign, according to current and former law enforcement and intelligence officials.

It is unclear exactly what about Mr. Page’s visit drew the F.B.I.’s interest: meetings he had during his three days in Moscow, intercepted communications of Russian officials speaking about him, or something else.

In April 2013, Mr. Page was caught on an F.B.I. wiretap in an investigation of suspected Russian intelligence officers in New York. Victor Podobnyy, one of three men later charged with being unregistered agents of a foreign power, had met Mr. Page at an energy symposium and was recorded describing him as “an idiot” with dreams of lucrative deals. There is no evidence that Mr. Page knew the man was an intelligence officer.

Now, CNN is reporting that Russia tried to use Page, and other aides, to infiltrate the Trump campaign during the 2016 election. Yet, as with any new development in this saga, there’s no evidence that points to Page knowing that he was in the company of Russian intelligence agents:

The FBI gathered intelligence last summer that suggests Russian operatives tried to use Trump advisers, including Carter Page, to infiltrate the Trump campaign, according to US officials.


The new information adds to the emerging picture of how the Russians tried to influence the 2016 election, not only through email hacks and propaganda but also by trying to infiltrate the Trump orbit. The intelligence led to an investigation into the coordination of Trump's campaign associates and the Russians.

These officials made clear they don't know whether Page was aware the Russians may have been using him. Because of the way Russian spy services operate, Page could have unknowingly talked with Russian agents.

There was also no evidence to accuse Mr. Page during the spy ring investigation that began in 2013, which the Times added was broken up by the FBI two years later. Two of the agents Victor Podobnyy and Igor Sporyshev had diplomatic immunity; Podobnyy worked as an attaché with the United Nations, while Sporyshev was a Russian trade representative. The third operative, Evgeny Buryakov, was convicted of espionage, sentenced to 30 months in jail, and was recently deported back to Russia earlier this month. The publication also said in the beginning of their report that in 2013, “an [FBI] investigation into the spy ring, but decided that he [Mr. Page] had not known the man was a spy, and the bureau never accused Mr. Page of wrongdoing.”

Like Jeff Sessions having contacts with foreign officials in his capacity as a member of the Senate Armed Services Committee, are we to expect that Mr. Page didn't speak with any Russians when he lived in Russia for three years (2004-2007) as a Moscow-based investment banker for Merrill Lynch? Of course, he did. Moreover, let’s not forget that this isn’t the first supposed bombshell to drop on the whole Russia-Trump collusion theory. Remember back in February when the Times reported that Trump associates had contacts with Russian intelligence [emphasis mine]:

Several of Mr. Trump’s associates, like [former campaign chairman ]Mr. [Paul] Manafort, have done business in Russia. And it is not unusual for American businessmen to come in contact with foreign intelligence officials, sometimes unwittingly, in countries like Russia and Ukraine, where the spy services are deeply embedded in society. Law enforcement officials did not say to what extent the contacts might have been about business.

In other words, this wasn't a smoking gun and this story, like most on this subject, failed to materialize into something more concrete or sinister. Senate Democrats have admitted that no solid evidence of collusion might be found in this investigation. Over at the House side, Rep. Adam Schiff (D-CA), the ranking member for the intelligence committee, said that there is no definitive proof of collusion. The absence of proof seems to have the Left jumping on any meeting as signs of treason. Katrina Vanden Huevel of the progressive Nation magazine said these antics were nothing more than neo-McCarthyite furor. Matt Taibbi at the Rolling Stone said the Trump-Russia story has devolved into a textbook case of mass hysteria. So, at least we have some in the liberal media noting how this story is turning their side into irrational creatures.