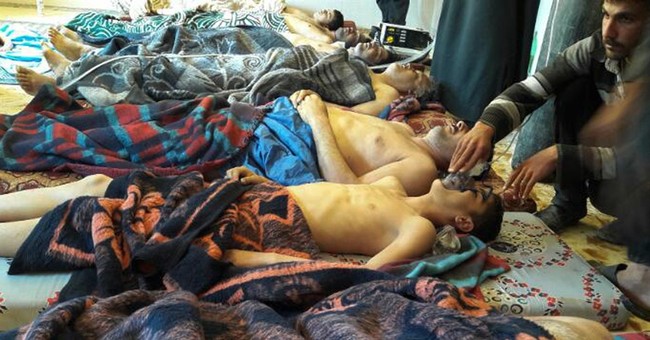 Earlier this month, Syria launched a chemical weapons attack in the Idlib Province, killing at least 80, including women and children. It prompted President Donald Trump to launch a massive missile strike against the base that reportedly carried out the attack. It also showed that the grand deal the Obama administration made between Syria and Russia to rid the former of its chemical weapons stockpile was not true, despite assurances from then-Secretary of State John Kerry. Now, even former Obama officials knew that Syria didn’t turn over its entire stockpile, but told us otherwise. It’s just another Obama mess that the Trump White House has to clean up. Yet, let's put those who have been killed in these horrific attacks on the back burner because we need to talk about climate change, according to the Nation [emphasis mine]:

The gas attack in Syria on April 4 consumed the world’s attention and galvanized the Trump White House, leading to the launch of 59 cruise missiles on a small airport from which the regime of Bashar al-Assad has been bombing the fundamentalist rebels in Idlib province. The pictures of suffering children, Trump said, had touched him. Yet the president and most of his party are committed to increasing the daily release of hundreds of thousands of tons of a far more deadly gas—carbon dioxide. Climate scientist James Hansen has described our current emissions as like setting off 400,000 Hiroshima atomic bombs each day, every day of the year.

The Syrian civil war has left more than 400,000 people dead, among them graveyards full of children and innocent noncombatants. About half the country’s 23 million people have been left homeless, and of those, 4 million have been driven abroad (some of them contributing to Europe’s refugee crisis and its consequent rightward political shift). The war occurred for many complex reasons, including social and political ones. The severest drought in recorded modern Syrian history in 2007–10, however, made its contribution.

The mega-drought drove 1.5 million farmers and farmworkers off the land to the seedy bidonvilles ringing cities such as Homs and Hama. In the northeast, 70 percent of the farm livestock died in those years. These displaced and dispossessed day laborers, who seldom found remunerative new work in Syria’s stagnant urban economy, joined in the demonstrations against the regime. Some were later drawn into the civil war as militiamen. Others in the end fled their country.

Of course, Syria has had milder periodic droughts all through history. Moreover, some countries in the region, such as Israel, have been much better at water management than the decrepit Baath state in Syria. It matters how such crises are handled. A team of scientists writing in the Proceedings of the National Academy of Sciences last year, however, found no natural explanation for how rapidly Syria has been drying out over the past century or for the withering severity of the latest drought. Human-caused climate change, which has raised the temperature of the planet 1.5 degrees Fahrenheit since 1880, they concluded, made this Frankendrought as much as three times more likely to happen than if our coal plants, factories, and automobiles had left Mother Nature alone.

Excuse me? Are we going to use a horrific civil war for global warming advocacy? At The Nation, that appears to be the case. News bulletin: no one cares about global warming when it comes to chemical weapons, disarmament, and trying to find a peaceful end to this bloody war. Second, no civilian on the ground in Syria cares about global warming. They’re too busy trying to survive, dodging bombs, and now not being caught in the middle of another chemical weapons attack. This is the very last thing on their mind if it’s on their minds at all. It’s a cheap left wing attempt to use a conflict with terrible amounts of human suffering and use it for progressive issue advocacy, and to take a gratuitous swipe at the president.

The magazine’s editor and publisher, Katrina Vanden Huevel, was right that the Democratic Party’s obsession about Russia is morphing into neo-McCarthyite furor, but this unseemly attempt to offer anther lecture about global warming on the backs of those who have died is rather inappropriate in the extreme. Moreover, is the Left really that desperate that they need to use death and war to remind people about this pet issue for progressives? Dear lord.