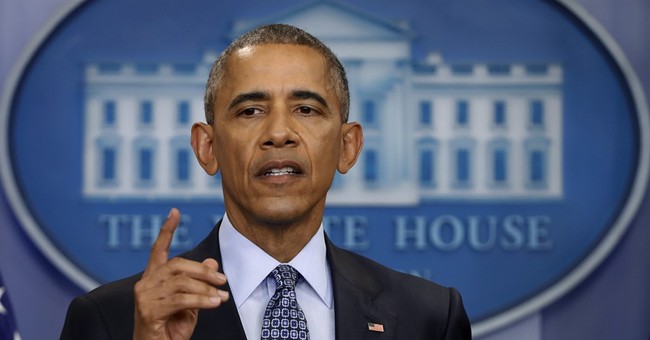 We know the Obama administration was less than truthful about their 2014 agreement with Syria and Russia that ended with the former removing its declared chemical weapons stockpile. The action was prompted by the horrific sarin gas attack in Ghouta in August of 2013. The Obama White House was mulling strikes, but a cool reception in Congress led to a deal with the Russians. Then-Secretary of State John Kerry touted the success of the agreement.

“We struck a deal where got 100 percent of the chemical weapons out," he said. Even President Obama gave it a shout out at his 2014 State of the Union, telling members of Congress “American diplomacy, backed by the threat of force, is why Syria's chemical weapons are being eliminated.”

We now know that some members of the Obama administration didn’t really believe that 100 percent of the weapons were out, but sold us the narrative anyway.

"We always knew we had not gotten everything, that the Syrians had not been fully forthcoming in their declaration," said Tony Blinken, who served as former deputy secretary of state in the Obama administration. Over at Circa, they reported that Blinken feels that while there may have been issues, the deal wasn’t “worthless” since a significant number of chemical weapons were removed. Still, why make the deal with a dictator and a foreign actor who is widely distrusted? [emphasis mine]:

If the administration suspected Syria would cheat on the chemical weapons deal, why make it? Experts say it's probably because a deal to get rid of most of Syria's chemical stockpile would bode better than an escalated military conflict. Not to mention Congress wasn't completely on board with air strikes against the Assad regime.

"I’m assuming, but this is an assumption, that their calculus was that the net benefit would be greater for the United States and for the Syrian people," said Barry Pavel, who served as the special assistant to the President and senior director for defense policy and strategy on the National Security Council (NSC) staff during the Bush and Obama administrations.

Pavel said it wasn't clear what the U.S. achieved by making a "wink and nod" deal with Syria.

"If they knew that this was not a comprehensive agreement I’m not convinced that that was necessarily the most productive outcome as we’re seeing right now, it literally came back to haunt people that we were trying to protect," he told Circa.

He said the U.S. should be more forthright in its foreign policy, and make it clear that there will be consequences if such a deal is broken.

And that’s what Trump did with this recent missile strike against the airfield that reportedly carried out the latest chemical weapons attack in the Idlib Province last week, which killed at least 80 people—including women and children.

Over at MSNBC, Council on Foreign Relations’ Richard Haas said that history would be rough on the Obama administration’s inaction on Syria, where paralysis by analysis seemed to be a serious problem. He also said that the Obama team talked themselves into inaction—and didn’t really take into account the systematic consequences of inaction could do regarding this conflict.