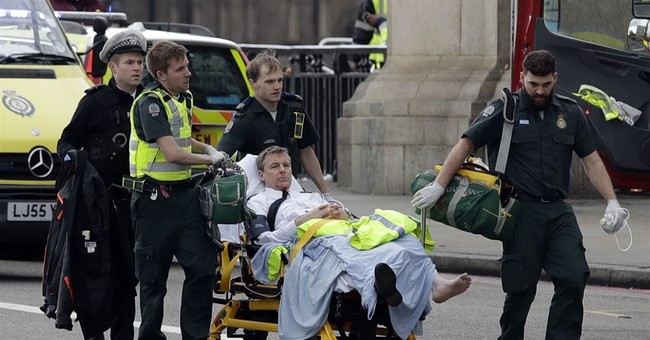 London has suffered a horrible terrorist attack that has left four people dead, with another 20 wounded. The injuries from the wounded have been described as catastrophic. It’s a sad day for the United Kingdom, but at NBC News—they’re worried that this act of terrorism will put wind in the sails of Europe’s right wing. Kyle Drennen at Newsbusters clipped and transcribed the exchange between host Ali Velshi and reporter Matt Bradley who made this point [emphasis mine]:

MATT BRADLEY [NBC NEWS]: But this is an incident that is obviously catching a city that's already been on edge. And everybody here in London, when they see these other incidents, these other terror attacks happening across Europe, they’re really just so much on edge waiting for the next foot to drop here.

And this is really going to have an impact on politics outside of that. You know, this is an issue that really is affecting so many people here in Britain. We've seen this rise of a kind of a right-wing movement here and throughout Europe. And this is only going to put wind in the sails of those who would say that this is an issue that needs to be looked at, that needs to be examined in terms of refugees – which is the conversation that's going on in the states.

But it should be noted, that MI-5, which is the domestic intelligence agency and police agency for the UK, they've come out and said that there is no terror link so far.

BRADLEY: And this is something obviously that they’re going to be investigating.

ALI VELSHI: Yeah, good point. They’re saying that it's too early to say, certainly, that it isn't, they’re still trying to get it locked down. Matt, stand by.

BRADLEY: Too early to say, right.

VELSHI: Stand by for me, Matt, because you’ve got great information for us.

Londoners will never be cowed by terrorism. pic.twitter.com/SidIuIztvu

This is an act of terrorism. Even London’s Mayor, Sadiq Khan, who originally called the attack a “serious incident” later said, “Londoners will never be cowed by terrorism.” Terror expert Dr. Anne Speckhard of Georgetown University said this “has all the hallmarks of an ISIS attack.” On that end, the investigation continues concerning whether this was an ISIS-led attack; their supporters on social media are surely celebrating. But British law enforcement is treating this matter as an act of terrorism, with Scotland Yard saying that this is a “full counterterrorism investigation.”