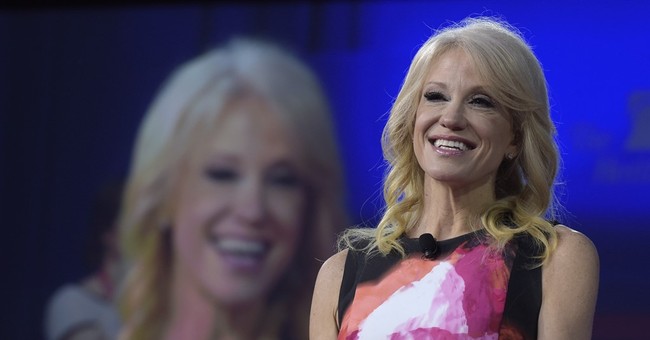 Rep. Cedric Richmond (D-LA) has apologized for a crude joke directed at top Trump aide Kellyanne Conway at the Washington Press Club Foundation’s annual awards dinner last Thursday. Sen. Tim Scott and Richmond were headliners at the event, where Scott told a Monica Lewinsky joke, saying that a lot worse happened on that couch in the Oval Office. It was a reference to the news media frenzy over a photo that showed the Trump adviser with her shoes on the couch. Is it a sign of disrespect? No. Conway was taking a photo of leaders of Historical Black Colleges and Universities with President Trump. It was just another example of Trump Derangement Syndrome. Yet, Richmond took it a step further (via WaPo) [emphasis mine]:

Earlier in the program, Sen. Tim Scott (R-S.C.) had joked that “a whole lot worse” had happened on that sofa in the 1990s, an apparent reference to former president Bill Clinton, who carried on an affair with White House intern Monica Lewinsky.

Richmond, who followed the South Carolina Republican, picked up the thread in his comedy routine. Here’s the full “joke”: “Tim, you kind of opened the door,” he said. “I really just want to know what was going on there, because, you know, I won’t tell anybody. And you can just explain to me that circumstance — because she really looked kind of familiar in that position there. Don’t answer — and I don’t want you to refer back to the 1990s.”

Now, Richmond says he wasn’t referring to a sexual act. When you get Scott’s remarks, coupled with a remark about Conway who was kneeling on the couch—you can’t help but think he was either not making sense (many in the audience were confused) or making an absolutely inappropriate reference to oral sex. After criticism ensued, Richmond said the remark was taken out of context and was not meant to be sexual:

Richmond insisted that there was no such intention behind his remarks. “Since some people have interpreted my joke to mean something that it didn’t I think it is important to clarify what I meant, ” he said in a statement. “Where I grew up saying that someone is looking or acting ‘familiar’ simply means that they are behaving too comfortably.”

When you’re explaining, you’re losing—and Richmond finally apologized (sort of) last night. Four days after the dinner. Oh, and clarifying the remark as relating to “behaving too comfortably.” True or false—no one is going to believe that explanation. Time’s Zeke Miller, who was chastised by the Trump White House for wrongly reporting that the MLK Jr. bust was removed from the Oval Office (he later retracted the story), noted that Richmond’s statement is weak, and that it was “ridiculous” that it took him four days to come to his senses:

4 NIGHTS LATER: Congressional Black Caucus Chairman @CedricRichmond apologizes to @KellyannePolls for remarks about her at the #WPCF dinner pic.twitter.com/Ap4GCa99xI

Ridiculous that it took that long - and the statement is weak as it is. https://t.co/H66B2sI9oE

“After a discussion with people I know and trust I understand the way my remarks have been received by many,” Richmond said in a statement. “I have consistently been a champion for women and women’s issues, and because of that the last thing I would want to ever do is utter words that would hurt or demean them. I apologize to Kellyanne Conway and everyone who has found my comments to be offensive.”

Rep. Nancy Pelosi (D-CA) did her party no favors with her “I know nothing” approach when CNN’s Jake Tapper, who described Richmond’s remarks as “sexist” and “disgusting,” asked her where is the outrage from the Democratic Party over this. Pelosi said she wasn’t at the dinner and pivoted to attack Trump when she told Tapper that she still doesn’t know what’s going on with this incident (i.e. why is it a big deal) since we have President Trump caught on tape making crude remarks about women and he’s occupying the White House. She also said that maybe Richmond deserved criticism, but she just “didn’t know the particulars.”

Either way, you look bad here, Nancy. You’re either engaging in willful ignorance because this was certainly picked up by multiple outlets and you just exposed yourself as a person who simply doesn’t read the news or this is bias by omission; it’s a national disgrace when sexist remarks are hurled at women, but if they’re conservative women—let them suffer.

And Tapper did note that pretty much everyone covered the leaked Access Hollywood tapes featuring Trump.

Now, some liberals will certainly harp on Scott, noting that he made the Lewinsky comment first, but did Richmond have to continue on that thread? Lewinsky and Bill Clinton did have a sexual relationship. That’s a fact. Richmond’s ill-suited Conway remark seemed to be a shoddy swipe at demeaning her. More of these antics are bound to come up over the next three years, and we shouldn’t hold our breath for Democrats to criticize their own members for making very bad jokes that are “disgusting” and “sexist.” After all, it’s against the Republicans. They don’t matter.