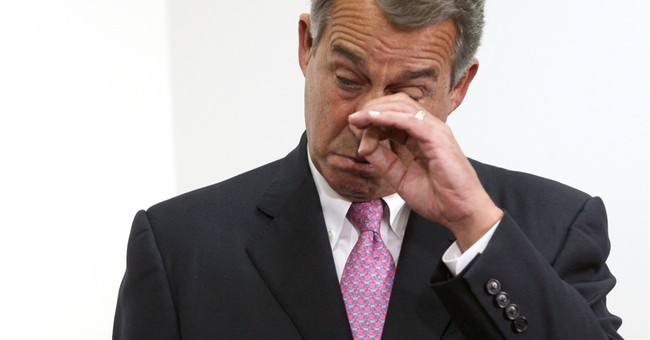 Former House Speaker John Boehner threw a wet blanket on the repeal and replace effort, saying that Republicans will likely fix the flaws in the legislation and build a conservative box around it at a conference hosted by the Healthcare Information and Management Systems Society in Florida. Boehner offered his crystal ball projection last Friday, showing once again that there appears to be multiple factions within the party over how to deal with former President Obama’s health care reform law (via CNN) [emphasis mine]:

Former House Speaker John Boehner threw cold water Thursday on the prospect of congressional Republicans following through on their pledge to repeal and replace the Affordable Care Act.

"They'll fix Obamacare," the former Ohio congressman predicted at a conference hosted by the Healthcare Information and Management Systems Society in Orlando, Florida. "I shouldn't have called it repeal and replace because that's not what's going to happen. They're basically going to fix the flaws and put a more conservative box around it."

Boehner's comments come as his former colleagues face an uncertain path forward on dismantling then-President Barack Obama's signature achievement. The party has yet to settle on a replacement plan, and many members are facing criticism at town hall meetings this week from constituents who are upset about the potential ramifications of Republicans following through on the campaign pledge.

The former speaker noted the difficulty Republicans would confront in getting everyone on board.

So, again, we have the repeal faction, the repeal and replace wing, and the fix it cohort—all vying to take the helm of the narrative and each with its own set of objectives that are legitimate.

The repeal wing knows the conservative base wants the bill gone, which is something that Republicans have campaigned on for years. The repeal and replacement and fixer upper wings knows that if repeal occurs, with no fixes (or a repeal bill) and people die as a result of lost coverage—then Democrats will reign hellfire upon Republicans over the 2018 and 2020 elections. There’s no amount of PR work that will help spin this in our favor. I agreed with what some conservative policy wonks, like Avik Roy, have said which is that the window for a clean repeal without political consequences slipped through our fingers when we lost the 2012 election. Now that millions are enrolled, liberals have the ammunition to say that the GOP wants to make America sick again (which they’re already done) and frighten voters that they’re trying to take away their health care. Let us not forget that Obamacare already stripped millions of their health insurance, while sending premium prices through the roof. Even CNN admitted that the law is not affordable for America’s middle class. Obviously, something needs to be done. We’ll see what happens, but tomorrow morning Guy will have a post about the 106-page replacement plan that the GOP is working on. Stay tuned.