House GOP: President Trump Is A Man Of Action And We Are Ready 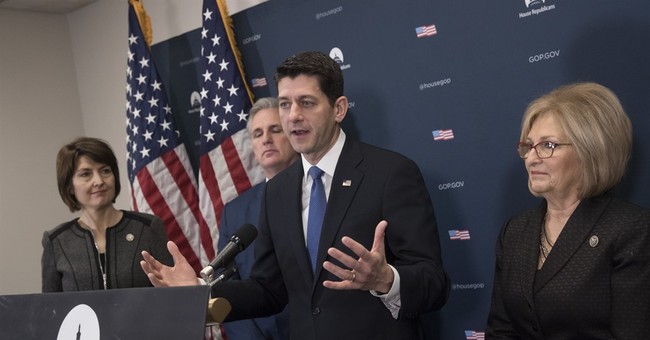 Earlier this morning, House Republicans held a press conference on what to expect this legislative term. Speaker of the House Paul Ryan said that repealing Obamacare and reducing burdensome regulations would be at the top of the list. House Majority Whip Steve Scalise (R-LA) said that they would pass bills that roll back regulations made by unelected bureaucrats, focus on job creation, and create an environment in which we can rebuild our middle class.

Rep. Cathy McMorris Rodgers (R-WA), Chair of the House Republican Conference, said they’ve long heard about the stories about rising health care costs and detrimental regulations, like the one on overtime enacted by the Obama White House, that have made it harder for entrepreneurs and small business owners to succeed. The House will focus on repealing Obamacare and replace it with people first health care that will work for everybody.

“President Trump is a man of action and we are ready,” she said.

Rep. Scott Tipton (R-CO) added that when done correctly, government regulation could enhance public safety and work for everyone. He did say that under the Obama administration, regulations went far beyond safety, becoming overly burdensome to the point where an entire industry—coal—was strangled to death by red tape.

Towards the end of the press conference, Speaker Ryan reiterated his support for President Trump’s executive order on immigration over the weekend, specifically the one relating to the 120-day moratorium on accepting refugees and immigrants from seven predominantly Muslim countries. He did say the rollout was regrettable, but noted that there was nothing wrong with pausing the influx to ensure we have proper vetting standards.